Thy faire body, lat hit nat appere,
Lavyne; and thou, Lucresse of Rome toun,
And Polixene, that boghten love so dere,
And Cleopatre, with al thy passioun,
Hyde ye your trouthe of love and your renoun;
And thou, Tisbe, that hast of love swich peyne;
My lady cometh, that al this may disteyne. 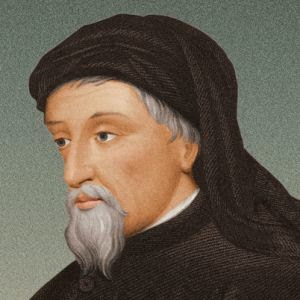 I love the Chaucer of The Canterbury Tales. I think his breadth of understanding of human nature rivals that of Shakespeare. Both writers, even while seeing clearly our flaws, pettiness and sometimes downright evil, have a warm tolerance for human foibles. For the record, I think Shakespeare wrote Shakespeare, one reason being that he was a man of the people, not an aloof aristocrat. Both men were middle class, and rubbed shoulders with those above and below them in station. They were great observers who were not afraid to confront and express what they saw. And they were great story-tellers and entertainers.

They were of different eras, of course, and led different lives. As well as a writer, Chaucer was both a man of science and a public servant, and it's thought that he also studied law. In the course of his life he did acquire connections to the nobility. He was an important writer even in his own day, and was the first person to be interred in Poets' Corner, in Westminster Abbey. For more details of his life, the link above will take you to the Wikipedia entry. That tells us that he was an influential poet, in his naturalistic style, his drawing on real life subject matter, and his metrical and satiric innovations.

But The Canterbury Tales, or even any one story from it, is far too long to reproduce here. Instead, I give you this little love poem. There's another version which names the lady (Alceste). I don't know which is the more authoritative, but I like the poetry of this one a little better. However there's not much to choose between them. And both, from this distance in time, are open to interpretation.

At first glance it seems that he praises his lady obliquely, without once describing her, by saying that she eclipses other, more famous beauties and lovers. Or is he saying something else entirely? Is it a poem of praise or one of disappointed love?

My first thought was that the final phrase of the chorus line, 'that all this may disdain', means that her mere presence will put 'all this' to scorn, because she is so far superior. However, the balade was often satirical, and so was Chaucer. He may well mean, instead, that she is cold-hearted, and despises love despite all the famous tales of great lovers.

That aside, for its time his language was forthright and colloquial (if satirical). This kind of language has great energy — and he uses it well.

But it's medieval language. Are you tearing out your hair trying to understand it? I am no scholar of Middle English, but in this transcription I understand some of it; and I can also make some likely guesses on the basis of the sounds, so I think the following is close. (If anyone knows better, please enlighten us in the comments!) Some of my version is still old-fashioned, e.g.'tresses' for locks of hair. Though I have taken some liberties, I didn't want to depart too far from the original. I'm not attempting a proper, poetic translation; merely trying to make it a bit clearer.

Hide, Absolon, your clear gold tresses;
Esther, lay your meekness all down;
Hide, Jonathas, all your friendly manner;
Penelope, and Marcia Caton,
Make of your wifehood no comparison;
Hide your beauties, Isold and Elaine;
My lady comes, that all this may disdain.

Your fair body, let it not appear,
Lavyne; and you, Lucrece of Rome town,
And Polixene, that bought love so dearly,
And Cleopatra, with all your passion,
Hide your truth in love and your renown;
And you, Thisbe, that has such pain from love;
My lady comes, that all this may disdain.

Hero, Dido, Laudomia, all of you,
And Phyllis, hanging [longing/languishing] for your Demophon,
And Canace, known by your cheer,
Ysiphile, betrayed with Jason,
Make of your truth neither boast nor sound;
Nor you two, Ypermistre or Adriane;
My lady comes, that all this may disdain.

You can read more of Chaucer's poems, including chapters of The Canterbury Tales, at PoemHunter, where they tell us he is known as 'the Father of English literature'. Works by and about him are also available at his Amazon page.