I love to go out in late September
among the fat, overripe, icy, black blackberries
to eat blackberries for breakfast,
the stalks very prickly, a penalty
they earn for knowing the black art
of blackberry-making; and as I stand among them
lifting the stalks to my mouth, the ripest berries
fall almost unbidden to my tongue,
as words sometimes do, certain peculiar words
like strengths or squinched,
many-lettered, one-syllabled lumps,
which I squeeze, squinch open, and splurge well
in the silent, startled, icy, black language
of blackberry-eating in late September. 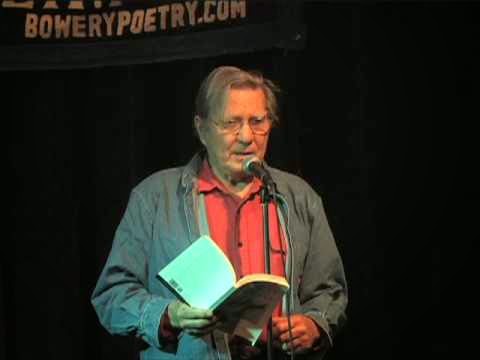 It seemed fitting to pay tribute to Galway Kinnell, as a leading American poet who died very recently aged 87. The only problem was that, not being American, although I knew the name I was largely unfamiliar with his work. He was one of those I always meant to catch up with some day.

Well, now I have finally begun my catch-up and have discovered the beauty and importance of his poetry — which no doubt many of you who are reading this already knew. (Feel free to educate me further in your comments!)

He is quoted as saying, "I think if you are ever going to find any kind of truth to poetry it has to be based on all of experience rather than on a narrow segment of cheerful events." I would agree with that; nevertheless this light-hearted celebration of the ordinary, and certainly the cheerful, is the one I could most wish to have written myself.

I like blackberries too! (I grew up with them. But in the climate where I now live, they are only a fond memory.) I also like the way he makes them a metaphor for the appreciation of words and the way we poets love to savour the juicy words on our tongues.

Sorry if this poem is already so well-known that using it here seems like stating the obvious. Again, not being American, I don't know which are his most-read favourites; but with such a noted poet it would probably be hard to find anything that was completely new to you.

The Wikipedia article is a bit sparse, as are some other online sources. The eulogies are the fullest and most interesting accounts I found of his life and work. The link on his name, above, is to the New York Times article. There is perhaps an even better, more detailed one in The Scotsman.

Give yourselves a treat and listen to him reading and talking about some of his poems here — where I discovered him to be a perfectly lovely man with a very endearing way about him and a good reading voice into the bargain. You'll need to scroll down to the bottom of the page. Please persevere if the third poem seems to be little more than a list — it will soon get more dramatic.

As always, you can find more of his poems at PoemHunter. There's a very full list of books by and about him on Amazon.

Email ThisBlogThis!Share to TwitterShare to FacebookShare to Pinterest
Labels: Galway Kinnell, I Wish I'd Written This