Glory be to God for dappled things —
For skies of couple-colour as a brinded cow;
For rose-moles all in stipple upon trout that swim;
Fresh-firecoal chestnut-falls; finches' wings;
Landscape plotted and pieced — fold, fallow, and plough;
And áll trádes, their gear and tackle and trim.

All things counter, original, spare, strange;
Whatever is fickle, freckled (who knows how?)
With swift, slow; sweet, sour; adazzle, dim;
He fathers-forth whose beauty is past change:
Praise him. 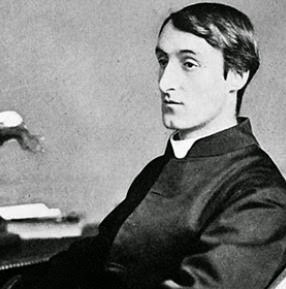 We don't have a Thanksgiving holiday in Australia, but can't fail to be aware of its importance in the United States — which may influence the rest of us in the global village to at least spare a thought for things we might be thankful about. So I thought a poem of gratitude would be appropriate today. This one came immediately to mind.

I only just realised, in researching this post, that Hopkins died so young (carried off by typhoid). A Jesuit priest, he felt a conflict between his religious and poetic vocations — on entering the priesthood he burnt his early poems, and later when he began to write again he refrained from publishing so as to avoid the fault of vanity. Luckily for us his old friend, the poet Robert Bridges, published his work posthumously.

Hopkins was a poetic innovator. He is now regarded as ahead of his time and his poetry as a precursor of free verse. He is particularly known for his invention of "sprung rhythm". This is explained in an excellent article at poets.org: 'By not limiting the number of “slack” or unaccented syllables, Hopkins allowed for more flexibility in his lines and created new acoustic possibilities', and by Wikipedia as, "designed to imitate the rhythm of natural speech".

It is more formal than free verse, however, with non-metric feet beginning with a stressed syllable and having any number unstressed. He sometimes accented certain syllables to show where the stresses fell. In this poem he's only done so twice, on the words "all trades" in the sixth line, and rightly so as otherwise we might not realise he intended both syllables to be stressed. Normally we, who were brought up on free verse, have no problem reading Hopkins, but his work must have posed some difficulties in a time when metric verse was considered the only way to write poetry in English.

Wikipedia goes on to say:

Some critics believe he merely coined a name for poems with mixed, irregular feet, like free verse. However, while sprung rhythm allows for an indeterminate number of syllables to a foot, Hopkins was very careful to keep the number of feet he had per line consistent across each individual work, a trait that free verse does not share. Sprung rhythm may be classed as a form of accentual verse, due to its being stress-timed, rather than syllable-timed, and while sprung rhythm did not become a popular literary form, Hopkins's advocacy did assist in a revival of accentual verse more generally.

In addition to developing new rhythmic effects, Hopkins was also very interested in ways of rejuvenating poetic language. He regularly placed familiar words into new and surprising contexts. He also often employed compound and unusual word combinations. As he wrote to in a letter to [Robert] Bridges, “No doubt, my poetry errs on the side of oddness…" Twentieth century poets such as W.H. Auden, Dylan Thomas, and Charles Wright have enthusiastically turned to his work for its inventiveness and rich aural patterning.

As you can see above, he also liked to play with sound, in such devices as alliteration and assonance.

Finally, it's worth noting that this poem is what he called a "curtal" (i.e. curtailed) sonnet, an abbreviated version of the Petrarchan sonnet, which he worked out to a mathematical formula. He was nothing if not inventive!

All in all, his experiments make for arresting poetry. However we want poetry to transcend its craft, and I think Hopkins always succeeds in this with his beautiful word choices and depth of feeling.

You can find more of his poetry at PoemHunter, and there are books galore at his Amazon pages, mostly second-hand — as well as a number in Kindle editions.

I'm thankful to Poets United for giving me the opportunity to immerse myself in Hopkins. It's been a long time, and he is so worth revisiting.

The Wikipedia link on his name, above, gives comprehensive biographical details. I was glad to read that, despite ill health, inner struggles and probable depressive illness, he exclaimed on his deathbed,