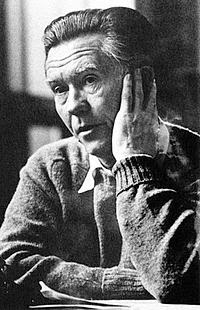 Be a person here. Stand by the river, invoke
the owls. Invoke winter, then spring.
Let any season that wants to come here make its own

call. After that sound goes away, wait.

A slow bubble rises through the earth
and begins to include sky, stars, all space,
even the outracing, expanding thought.
Come back and hear the little sound again.

Suddenly this dream you are having matches
everyone's dream, and the result is the world.
If a different call came there wouldn't be any
world, or you, or the river, or the owls calling.

How you stand here is important. How you
listen for the next things to happen. How you breathe.

You can see why I wish I had written this. Sigh. Rosemary is a bit under the weather, today, my friends, so  I am bringing this poet to you, who wrote so wonderfully (and prolifically) during his lifetime. Stafford lived from 1914 until 1993, but he got a bit of a late start as a published poet. He was 46 years old when his first major collection of poetry was published.  Traveling Through the Dark (whose title poem is one of his best-known) won the 1963 National Book Award for Poetry. Not a bad start! During his lifetime, his body of work totaled some 22,000 poems.

Stafford observed a quiet daily routine of writing. His work focused on the ordinary events of daily life. He died of a heart attack on August 28, 1993, having just written the lines:

'You don't have to
prove anything,' my mother said.
'Just be ready
for what God sends.'


Wow. Stafford was born in Kansas, and received his BA from the University of Kansas in 1937.

He was a pacifist as well as a poet. When drafted in 1942, he declared himself a conscientious objector, and performed alternative service in forestry and soil conservation (for $2.50 a month!) from 1942 until 1946, in Arkansas, California and Illinois. While in California, he met and married Dorothy Hope Franz, and they had four children, including one child who died, two artists, and the poet and essayist Kim Stafford.

He received his MA from the University of Kansas in 1947. His Masters' thesis, the prose memoir Down In My Heart: Peace Witness in Wartime, was published in 1948.

William Stafford was appointed 20th Century Consultant to the Library of Congress in 1970, a position now known as Poet Laureate. He taught, during his lifetime, at Lewis and Clark College in Oregon, Manchester College in Indiana, San Jose State, California, then returned to Lewis and Clark.

Not only do I wish I had written this poem, but his dedication to his craft inspires me to work harder on my own.

Feel better, Rosemary! For any errors or oversights in my presentation of this material, I humbly apologize.

source: Wikipedia
Poems and photos used in ‘I Wish I’d Written This’ remain the property of the copyright holders

Email ThisBlogThis!Share to TwitterShare to FacebookShare to Pinterest
Labels: I Wish I'd Written This, William Stafford