Always for the First Time 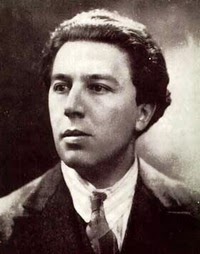 André Breton has been called the founder of Surrealism. There are various definitions of Surrealism, as you'll find if you Google, saying much the same thing in slightly different ways. These two between them seem to cover it most comprehensively:

A movement in art and literature that flourished in the early twentieth century. Surrealism aimed at expressing imaginative dreams and visions free from conscious rational control.

A 20th-century avant-garde movement in art and literature which sought to release the creative potential of the unconscious mind, for example by the irrational juxtaposition of images.

Breton's own Surrealist Manifesto of 1924 calls it:

Psychic automatism in its pure state, by which one proposes to express — verbally, by means of the written word, or in any other manner — the actual functioning of thought. Dictated by the thought, in the absence of any control exercised by reason, exempt from any aesthetic or moral concern.

It grew out of symbolism and dada, and was influenced by Freudian psychology. A number of other French poets of that era also identified as Surrealists. (The most famous exponent was, of course, the Spanish painter, Salvador Dali.)

I find some contemporary Surrealist writings a bit too weird, the dreaminess more like nightmare, so I've not been interested in trying it. But the early Surrealists were less extreme. This piece is delicate and lovely, and coherent enough to carry me along unresistingly, while still being more imaginative than rational. I might try it some time after all! Indeed, following the rise of 'confessional' poetry and our awareness of the subconscious, I suspect many of us are doing something like it from time to time, without the label.

As usual, the link on the poet's name, above, leads you to the Wikipedia article. If you'd like something a little more detailed and literary, the Poetry Foundation article might fit the bill.

There is also an Amazon author page, really four pages, including not only poetry but fiction and critical / philosophical essays.