While being washed,
suddenly
my dog shakes
a vibrant splash
against summer light

At dawn
no one has come yet
to the wide lawn.
I release my dog
from his collar

Closer and closer
As I come to my house
in the cold night,
I hear my dog barking
louder and louder 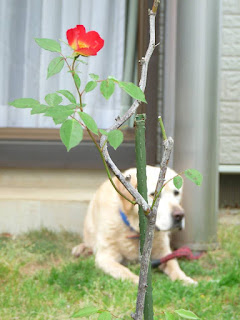 Haiku of my beloved dog : Moumin!

1.
On my way home
I bought a diaper for my dog-
cherry blossoms.

3.
I hope my dog
will drink water in bed-
cherry blossoms.

4
I wipe
my bedridden dog
with a towel.

5
My bedridden dog
stands up at last-
spring morning.

6
My beloved dog
is bedridden again
all day long.

7
I close
open eyes of my dog-
the deathbed. 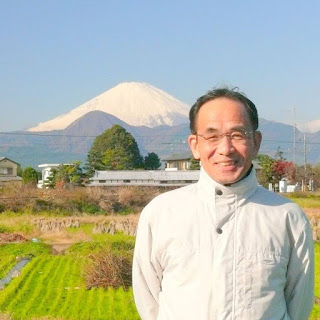 I hope you can all cope with yet more on the theme of losing a beloved dog! (After reading Jim Cole on the subject last time.) These are very different poems from that one, but in these too you can feel the intense love for the canine companion.

Taro Aizu is one of my poetic friends on facebook, whom I know through his posts of haiku and gogyoshi. I know him best through his moving poems on Fukushima. Nevertheless it was his gogyoshi about Moumin which I found so enchanting that I wanted to share them here. Then, because of Moumin's death, we both felt it was right to share the haiku too.

When I asked him for some further details about himself, he generously provided the following biographical and literary notes:

A biography of Taro Aizu

I was born in the Aizu region of Fukushima prefecture, Japan and now I live in Kanagawa near Tokyo. I have been writing haiku for 20 years, gogyoshi for 12 years in Japanese, and both for 5 years in English and French.

Fukushima nuclear plant exploded on March 12, 2011, after a huge earthquake and a large tsunami on March 11. That summer I went to my hometown, Fukushima, for the first time since the disaster. There I happened to see my nephews hanging dosimeters around their necks. The scene gave me a great shock and that experience inspired me to write “My hometown, Fukushima”. Moreover, I translated it into English and French the next year, in 2012, and then announced it across Facebook.

European and Brazilian artists have been holding exhibitions inspired by my poems in Holland, Germany, Portugal, France and Brazil in 2012, 2013, 2014
and 2015.

Exhibitions of artworks inspired by my gogyoshi were held 8 times in 5 countries :

1. Japanese reading by myself
http://www.youtube.com/watch?v=HSl-B7366ug

2 .English reading by myself
http://www.youtube.com/watch?v=LlucbYVW7ig

⑤   Youtube videos of my haiku reading by myself in Japanese, English and
French

Email ThisBlogThis!Share to TwitterShare to FacebookShare to Pinterest
Labels: gogyoshi, I Wish I'd Written This, Taro Aizu