A Sea-change
By Paul Mortimer

from Ariel’s song in The Tempest

Newspapers roared ‘sunbed slaughter’
but it was also the death of
a particular innocence.
Those seaside holidays
with their buckets and spades,
sandcastles, ice creams,
brightly coloured deck chairs,
children darting in and out
of ankle deep water.
The black world of terror
broke through to a level we
thought was cocooned.

It tainted every photo album
all the way back to 1953.
Mum riding a donkey on Rhyl
beach. Everything was
so black and white then. 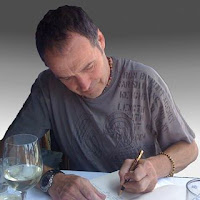 This was written very recently — so much so that readers at Paul's blog, Welshstream, didn't need to be told it was written in response to the terrorist attack on holiday-makers on a beach in Tunisia.

I'm sure it doesn't need much commentary from me, except to remark how well he hit the nail on the head with his focus on that 'particular innocence'. How many of us had those carefree seaside holidays as children? I certainly did!

When I asked him about himself, Paul told me:

'Much of my poetry is inspired by nature and urban landscapes. I am a member of the 8-strong performing poets group Juncture 25 based in Taunton and we have featured at a number of events and literary festivals in the past 12 months. We have recently had an anthology of our work published. Born in St Asaph, Denbighshire, I am something of a nomad having lived in over 40 different places. Now happily settled in Devon.'

(As you might guess from the name of his blog, his birthplace, Denbighshire, is in Wales.)

The photo I have used is from his facebook writer's page.

His book, Fault Line, published by Lapwing, is available here.

Personally, I'll be following his blog from now on!

Email ThisBlogThis!Share to TwitterShare to FacebookShare to Pinterest
Labels: I Wish I'd Written This, Paul Mortimer