The Living Dead / I Wish I'd Written This

A hastily-added note, after reading early comments:
This poem is sarcastic and satirical and should be read that way. (Qualities which are not always immediately obvious onscreen, particularly if there is no shared background of time and place.)

I want to believe the beautiful lies
the past spreads out like a feast.

Television is full of them & inside
their beauty you can act: Paul Keating’s

bottom lip trembles then recovers,
like the exchange rate under pressure

buoyed up as the words come out—
elegant apostle of necessity, meaning

what rich Americans want, his world is
like a poem, completing that utopia

no philosopher could argue with, where
what seems, is & what your words describe

you know exists, under a few millimetres
of invisible cosmetic, bathed

in a milky white fluorescent glow.

The subject of the poem, Paul Keating, for those who don't know, was Federal Treasurer of Australia from 1983 to 1991 and Prime Minister from 1991 to 1996. Although he did many good things during his time in politics, he also master-minded 'the recession we had to have' which, amongst other effects both wide-reaching and personal, helped send me and my second husband bankrupt. So you can imagine that I have some sympathy with John Forbes's poem!

But I also apply it to our present Treasurer, albeit he is from a different side of politics and has his own agenda. Change the name, and every word of the poem could just as well apply to him. I strongly suspect the same would be true of other so-called 'first world' countries. 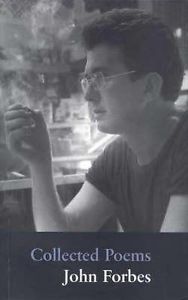 So although John Forbes is, sadly, among the 'living dead' after a heart attack at the age of 47, and I always give you poems I love and admire from our poetic ancestors, this one I also very much wish I had written!

I suspect Forbes is little known outside Australia. Here, he had great impact during his short life and poetic career. (His friend Ken Bolton tells us that he ironically styled himself 'a major-minor poet'.) But I may be wrong. It is Poetry International which says of him:

Forbes’ work is frequently deeply funny, fueled by a use of irony and satire that is tough and socially aware, and determined by vulnerability or self-deprecation rather than elitism or pretentiousness. It is knowledgeable without being in any way defensive or pompous. Carl Harrison-Ford noted  that Forbes was “distrustful of even a whiff of high seriousness”, and yet his poems, with their humour and staggering twists of thought and image in narratives riddled with similes that confound as they illuminate, are serious in intent and application while remaining demotic and familiar.

and also notes that:

In February 2008, family, poets and close friends of his generation, along with those who only knew John Forbes through his writing, gathered at Gleebooks in Sydney to commemorate the tenth anniversary of his death. The event was packed in a way that events for few living poets would be and was clear testimony to the enduring admiration, respect and love for Forbes, both as a person and as a poet of vital and enduring importance.
He was an original. A review of his last (posthumous) book, by the distinguished poet, editor and publisher John Tranter, is perhaps the best place to gain an understanding of his writing (with examples thereof).

Most of his books are now out of print. His 'Collected', from which this poem comes, is available from Booktopia's ebay store. (I was lucky enough to find a second-hand copy for $1, being tossed out as 'old stock' by our local library. Philistines! But I shan't complain.)

You can read a selection of his individual poems at the Australian Poetry Library (click the link on his name, above) and there is a selection available in pdf from PoemHunter.

We have a new column for you next Friday, and thereafter on every fifth Friday of the month when that happens, which is irregularly, about four times a year — something a bit different from anything we've offered you so far.

And the week after that, on August 7th, Sumana will feature another great poetic ancestor: one dear to her heart. (Can you guess who it will be?)
Posted by Rosemary Nissen-Wade

Email ThisBlogThis!Share to TwitterShare to FacebookShare to Pinterest
Labels: I Wish I'd Written This, John Forbes, The Living Dead