Funny Thing Being a Writer

Funny thing being a writer
Most of the time you don’t get to do any writing
A lot of the time you wonder where the writing went
Oftentimes you miss the writing
And missing writing feels like nothing else
Sometimes its like an absence of a horse between your thighs
Or a wave crashing over your head
Or a sweet swallow, a taste in your throat
Or an ache in your chest that hurts
Missing writing is a bit like missing a person
But the person is the real you

Then its off back to the front of the shop
Dressing the windows, selling your wares
You are the head chef of your own restaurant
You’ve got hungry customers that need servicing
Got something in the oven waiting to rise
Got some good stuff ready to publish on ice
Your larder is full of writings you did years ago
Back when you were cold and poor and thin
When all you wanted to do was be a writer
When all you ever did was write all day and night
And nobody expected you to do anything else but write
Back when you thought writing was all that writers had to do.

Oh, how I relate to this! And I bet you do, too. I wasn't a friend of Salena's on facebook – I am now! – but saw this poem when someone else shared it, and had to have it for 'I Wish'. Salena graciously consented, and supplied me with photos and bio. So, without further ado, let me introduce you to this very active writer:

"Salena Godden has been described as ‘The doyenne of the spoken word scene’ (Ian McMillan, BBC Radio 3’s The Verb);  ‘The Mae West madam of the salon’ (The Sunday Times) and as ‘everything the Daily Mail is terrified of’ (Kerrang! Magazine). Her pamphlet of poems, Under the Pier, was published by Nasty Little Press in 2011. An anthology of poetry ‘Fishing In The Aftermath, Poems 1994  - 2014’ was published in July 2014 with Burning Eye Books.  Her literary childhood memoir 'Springfield Road' was successfully crowd funded and published in October 2014 by Unbound Books.

"Salena is the lead singer and lyricist of SaltPeter, alongside composer Peter Coyte.  She has appeared on BBC radio as a guest on various shows including Woman’s Hour, From Fact To Fiction, The Verb, Saturday Live and Loose Ends. She is currently the poet in residence for Click on the BBC World Service. 'Springfield Road' featured on Arun Rath's 'All Things Considered' in the US on NPR.  Salena Godden works with award winning radio producer Rebecca Maxted, writing and presenting BBC radio documentaries. Try A Little Tenderness – The Lost Legacy of Little Miss Cornshucks was made in Chicago and aired on BBC Radio 4 and the BBC World Service throughout 2014. This followed the success of Stir it Up! - 50 Years of Writing Jamaica which was also for BBC Radio 4. Salena can be found reading at various literary festivals and events in the UK this summer and the USA in October - Please go to www.salenagodden.com for the latest news and dates."

Ha, just a few examples of the things that writers need to do besides write! There are even more details on her website, Waiting for Godden.

As befits a spoken word poet, you can find her on YouTube. Wow, what a revelation! First of all, she has a great voice – or rather, several voices, as she sometimes speaks in more than one, for more than one character in a narrative. She has a wonderful way with words: not only the meanings but the sounds of words, stringing them together in ways that awe me.

And she is not afraid to tell it like it is. She can be confronting, explicit, hilarious, even downright disgusting – and I'm now a total fan. She's always brilliant. But if you don't want your socks knocked off, while you roar with laughter despite yourself, don't go there. What she is not is polite. Which is fabulous in my book! I think polite poetry ought to be a contradiction in terms. On the other hand, the 'bad language' is used in what seem to me very good ways and perfectly poetic (though perhaps not everyone will agree).

There are also YouTube interviews, where we see her in gentler, more reflective mood, such as when she's talking about her autobiography. The outrageous performer, it seems, is a persona – though I don't doubt her views are authentic. But she is more complex than that.

Her books are available from Amazon and Google.

I can hardly wait for this post to go public so I can tout this poet all over facebook. 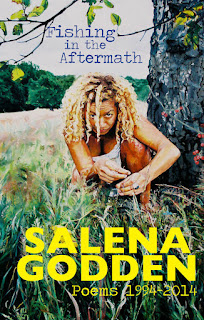 Email ThisBlogThis!Share to TwitterShare to FacebookShare to Pinterest
Labels: I Wish I'd Written This, Salena Godden