God Says Yes To Me
By Kaylin Haught 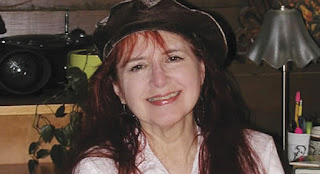 I don't remember now where I came across this, but I fell in love with it at once and saved it in my scrapbook.

I love that God here is 'she', and I love the colloquial conversational tone the poet gives to God.

I greatly admire the way this poem – entirely without punctuation – is crafted so that it simply has to be read as the poet intends, all the pauses and inflections happening exactly as they should, and everything building to the wonderful affirmation of the last line.

You may well know the poem already, as when I Googled I found it all over the place. I decided to use it anyway, so that anyone who has not seen/heard it doesn't miss out; and because, even if you have, something so good can stand repetition.

Here's a very cute video of the poem on YouTube.

The San Diego Reader tells us that:

Kaylin Haught was born in Albion, Illinois, in 1947, and raised on the Oklahoma prairie. Her father was a preacher and oilfield roustabout, her mother a homemaker, factory worker, and Sunday-school teacher. Her poetry has appeared in Ms. magazine, Onthebus, and other journals, college texts, and inspirational books. “God Says Yes to Me” was set to music to be used in “Choirs,” by the composer Paul Carey.

The online store of This Land Press says:

Kaylin Haught is an Oklahoma poet. She lives in Grove, in a house older than the state that’s abbreviated on her mail. Haught is the author of the poem “God Says Yes To me.” She is the daughter of a preacher, a believer since she was knee-high. Now she finds God in nature. Sometimes Haught misses church. She might go back one day, she says.

Notes on the music fill in a few more details:

Kaylin Haught’s poem God says Yes to me is, to many people, a witty, humorous poem about affirmation and feminine power. This was Kaylin’s own take on her poem when it was published in Poetry 180, a high visibility Library of Congress sponsored series introducing contemporary poetry to junior high and high school age students.


Since that time, the poem has also been quoted in many sermons in churches around  the country, as many ministers have stressed the more serious value of Kaylin’s poem -- the power of God (whether He, She, or It!) to affirm our lives in even the tiniest, seemingly inconsequential detail.

It’s this tendency of a great text to elicit multiple interpretations that draws me to set such poems to music. And please notice that God loves jazz—most all of God’s answers to the questions are in swing time!

It's interesting that the San Diego Reader subtitles the poem, 'By Various Authors' even though Haught is credited as the poet. Perhaps the YouTube images of several girls asking God these questions is an accurate representation of the source material.

The Google search also led me to someone complaining of being unable to find her, or more of her work. 'Kaylin, who are you?' he asks. I can't find more of her work either, but there is a facebook 'Writer' page, which I have duly 'liked'. It doesn't have much on it though, nor does it appear to have existed for very long. It may have been created by a fan rather than the poet.

Elusive as she may be, the poem itself is direct and accessible. I suspect that she is simply not active online – there are still plenty of people like that, believe it or not! – and has possibly written and published lots more stuff which appears on paper instead. However, if she did only ever write this one poem, well it's the one to have written, isn't it?

Email ThisBlogThis!Share to TwitterShare to FacebookShare to Pinterest
Labels: I Wish I'd Written This, Kaylin Haught