What to Do with Objects
By Robert Bly

A little snow. Coffee. The bowled-over branches.
The wind, it is cold outdoors, but in the bed
It's warm, in the early lamp-light, reading poems.

These fingers, so rosy, so alive, move
About this book. Here is my wide-traveling palm,
The thumb that looks like my father's, the wedding ring.

It's time to prepare myself—as a friend said—
"Not to be here." It will happen. One day
The dish will be empty on the brown table.

Towards dusk, someone will say, "Today
Some rooms were busy, but this room was not.
The gold knob shone alone in the dark."

No breath, no poems, no dish. And the small change
Will go unnoticed by the snow, the squirrels
Searching for old acorns. What to do with

All these joys? Someone says, "You take them."

The recent deaths of poets I've known have me reflecting on my own mortality – as Bly was when he wrote this, for whatever reason.

I like the simple directness of the poem (what Wikipedia calls his 'plain, imagistic style') and the ease with which he dwells on various small things that are important in the moment. In the end, despite the title, it is not the physical objects he dwells on so much as the joys they inspire – and not, I think, the dish and the small change so much as the squirrels, the snow, the warm bed, the book of poems, his own hand, the wedding ring....

And how can one 'take them'? And who should do that? It's open to interpretation, but I think he means that he himself must take them with him when he dies. If so, it seems to me the only way to do that is to fully experience them while he is alive to do so. And then it becomes not just a message to himself, but to each of us – live fully, don't waste what time you have, savour the joys. The recently deceased poets I am thinking of did that! 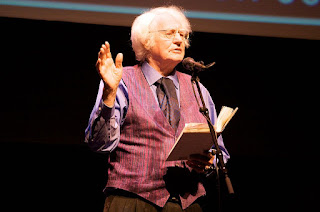 Bly himself is still with us, at nearly 90 years old. He has been an important and influential American poet, widely known also in other countries. He has been involved in numerous translations into English from the literatures of other cultures; he has created a specific activism of poets and writers, e.g. during the Vietnam War; he became deeply interested in the Goddess, the Divine Feminine, and this in turn led to the formation of the Men's Movement; both these explorations have included delving into myths and fairytales, as well as Jungian archetypes.

He has also produced many volumes of poetry and several non-fiction books, as well as editing a number of poetry anthologies. You can find pages of books by and about him at Amazon.

He was born in Minnesota of Norwegian ancestry, has lived most of his life there, and became its first Poet Laureate in 2008. He has received various awards, including the Robert Frost Medal in 2013.

The most comprehensive source of information about his life, work and aesthetics is probably his website. In addition to his bio, details of his books etc., this includes both an extensive interview and details of a film about him, A Thousand Years of Joy. The film, we are told, is available on DVD and can be ordered online.

You can also consult the Wikipedia link above, and similar material (plus poems) at The Poetry Foundation, PoemHunter and Academy of American Poets. The latter includes audio presentations of some poems. There are also readings and lectures on YouTube.

Email ThisBlogThis!Share to TwitterShare to FacebookShare to Pinterest
Labels: I Wish I'd Written This, Robert Bly