Rocks in their Place
by Myron Lysenko

My father answered the door in his dressing gown
The front lawn neatly mown, rocks in their place 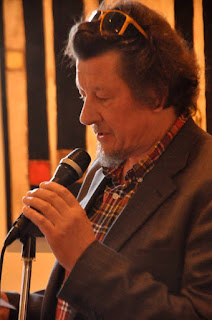 Myron's another old crony from my Melbourne days, when we were both very involved in 'performance poetry' as we used to call it then.

He was born in 1952 in Heyfield, Victoria, the son of Ukrainian post-war migrants. At the time when I first got to know him, he helped Kevin Brophy co-found and co-edit the vibrant literary journal Going Down Swinging – which went on to become one of Australia's best-known and longest-lasting 'little magazines', still going strong. (In fact the launch party for the 37th issue is happening tonight in Collingwood, Melbourne.) Myron continued in his editorial role from 1980-1995 before passing it on to new editors. He was the haiku editor for the special 30th issue of Going Down Swinging.

He's a lot younger than me, and now, many years after we first met, lives in a country town with his partner who is also a poet, and they're raising their young daughter.

He tutors in Creative Writing at the Carlton Neighbourhood Learning Centre in inner Melbourne, and at the Woodend Neighbourhood House in his rural town.

His poetry has appeared in literary journals over 400 times in Australia and internationally since 1981.

As you can see from the photo, he is also still presenting poetry by speaking it aloud. He is the convenor of Chamber Poets, a monthly reading of spoken word. He also runs regular ginko (haiku walks) in various scenic places. Myron plays ukulele and writes songs for his poetry band Black Forest Smoke. He moved from an inner suburb of Melbourne to his present home in 2011, and is the Victorian Regional Officer for Haiku Oz. He loves haiku and senryu, which he has been exploring for years; he is probably one of the best-known of current Australian haiku writers.

He is the author of six books of poetry. The last one,  a book of haiku, was published in 2005. They are all sold out and out of print now, but you can still sample more of his work online. Clips of Myron reading poetry live and performing with his band can be found at:  http://www.youtube.com/channel/UC93MXBvIG9T53isfUOhO8yQ

Much of Myron's writing features deadpan humour, with a particularly Australian flavour. You'll have to go to YouTube for that e.g the introduction by his old friend Kevin Brophy, followed by Myron reading what he calls a fiction about the start of Going Down Swinging: https://www.youtube.com/watch?v=GI6wpoPhCqw

In the poem I've chosen to share with you, I fell in love with the spare yet vivid descriptions, the way the scene comes alive in these couplets of keen attention to detail, the restraint and assured craft which convey so much tenderness and pain via objective observation. Myron's poetry always tended this way – and I think the haiku have also been good training in these qualities (as they tend to be for all who seriously attempt them).

Besides my admiration for the poet's skill, this poem touches me on a personal level. Both my own father and my husband Andrew (both now deceased) had dementia. So, although neither of them played out this exact scene with me, there are things I recognise in both the father and the son in the poem.

It's beautiful in what it does and doesn't say.

Email ThisBlogThis!Share to TwitterShare to FacebookShare to Pinterest
Labels: I Wish I'd Written This, Myron Lysenko