When the golden day is done,
Through the closing portal,
Child and garden, Flower and sun,
Vanish all things mortal.

As the blinding shadows fall
As the rays diminish,
Under evening's cloak they all
Roll away and vanish.

Garden darkened, daisy shut,
Child in bed, they slumber--
Glow-worm in the hallway rut,
Mice among the lumber.

In the darkness houses shine,
Parents move the candles;
Till on all the night divine
Turns the bedroom handles.

Till at last the day begins
In the east a-breaking,
In the hedges and the whins
Sleeping birds a-waking.

In the darkness shapes of things,
Houses, trees and hedges,
Clearer grow; and sparrow's wings
Beat on window ledges.

These shall wake the yawning maid;
She the door shall open--
Finding dew on garden glade
And the morning broken.

There my garden grows again
Green and rosy painted,
As at eve behind the pane
From my eyes it fainted.

Just as it was shut away,
Toy-like, in the even,
Here I see it glow with day
Under glowing heaven.

Every path and every plot,
Every blush of roses,
Every blue forget-me-not
Where the dew reposes,

"Up!" they cry, "the day is come
On the smiling valleys:
We have beat the morning drum;
Playmate, join your allies!" 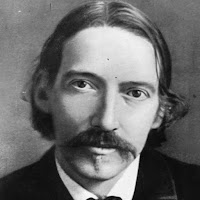 I was reminded of Robert Louis Stevenson recently, seeing him quoted online, and went exploring to re-acquaint myself with him. I had A Child's Garden of Verses when I was very young. Although I was a child who loved poetry, I didn't love that. I felt patronised (even though I was too young to know that word). Did he make the mistake of writing down to children, or was it simply that he was from a different era? I think his children's poetry is charming when I read it now, as an adult. I'm pleasantly surprised to discover he also wrote poetry for adults, as well as some, like this one, which could be for either, or both.

Of course, he also wrote wonderful stories – some, such as Strange Case of Dr Jekyll and Mr Hyde, definitely not for children, others such as Kim and Treasure Island, for any age. I certainly enjoyed those two when I was still a child – though I realise now that some things in Kim went over my head. Kidnapped was another favourite.

Today, feeling like some escape from a world in which we are constantly bombarded with news of terrible events and the worst of human character, I was glad to find this poem. It seems to conjure up a time and place of innocence and joy, a life of safety and reassurance, and delight in the natural world. I hope it gives you those feelings too.

Stevenson was such a celebrity in his day, and is still so well-known, I probably don't need to discuss him in detail. You very likely know already that he was born in Scotland; that he was also a travel writer and essayist, and a composer of music; that he was very happily married, but had poor health, generally ascribed to tuberculosis, and died at only 44. How thankful we can be that he wrote so much while he still lived! His last years were spent on the island of Samoa, where he is buried.

If you would like to find out more, you can try Wikipedia, or many other sources via Google. And his poems are available online in this complete collection (arranged alphabetically) and at PoemHunter.

Also, I have just been alerted to a free, illustrated Archive ebook of A Child's Garden of Verses – here. (Click on a page to turn it.)

The most interesting article I found about him, 'The Double Life of Robert Louis Stevenson,' is part of the current attempts to restore his literary reputation, after years of his being dismissed as a minor writer. The author quotes Stevenson's own theory of fiction as a possible reason why he was so dismissed:

Man's one method, whether he reasons or creates, is to half-shut his eyes against the dazzle and confusion of reality .... Life is monstrous, infinite, illogical, abrupt and poignant; a work of art, in comparison, is neat, finite, selfcontained, rational, flowing, and emasculate .... The novel, which is a work of art, exists, not by its resemblances to life, which are forced and material . . . but by its immeasurable difference from life, which is designed and significant.

Well, that seems to apply to this poem, too, which took me away a little while from the 'monstrous, infinite, illogical, abrupt and poignant'!

PS I said recently that I'd be posting (in random order of topics) on the first and third Fridays of the month, and the fifth when there is one. Let me correct myself. It occurs to me that it would be simpler just to post fortnightly, so from now on that's what I'll do.