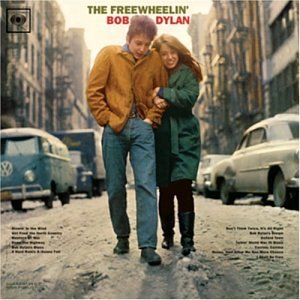 Well, I had to, didn't I, now that he's just won the Nobel Prize for Literature?  (Hastily shunting the post I had prepared for this date to a future occasion.)

Many people are complaining that the prize went to a musician. 'The words can't stand alone,' they claim. Well, I do believe it was Dylan's words that the judges considered, and to my mind they certainly can stand alone – though it's good they have had music to carry them to a wider audience, because they are often important words.

How I would love to have written the above, with its power and fury – and, yes, its lyricism. And he was innovative. Those extended sentences, and the repetition of the heavy syllable, 'hard', give it a relentless feel which is all too appropriate.

Two of the criteria for the Nobel Prize for Literature are that the writing should be a force for good (I'm paraphrasing) and have world-wide influence. Anyone who was around in the sixties knows what a huge influence Dylan had at that time, and that he certainly intended to be a voice for change. I chose this particular song because, alas, it is still all too current. It is not nuclear rain which threatens the environment now (though it is not an impossible eventuality) but our environment is still threatened and there are other ways by which whole landscapes die.

Well, this prize is evidently a controversial decision, which is probably a good thing – nice when literary matters spark heated debate! – and opinions will differ. Mine, as you realise by now, is that the prize is not only richly deserved but way overdue. Please feel free to heartily endorse this view in the comments, or take passionate issue with it. (Yes I know, I am being unashamedly biased, but you do get some right of reply, LOL.)

I will conclude with some excellent words from my friend, Aussie poet Lyndon Walker. I think he makes the case very well in support of Dylan's win:

A very controversial decision which I strongly support. A writer who opened up worlds for examination. Deeply questioning the status quo in his own country and forging a new vision of race and sexual relations at a time when these things were in turmoil. Always ahead of the social zeitgeist. ... A writer who veered from gritty clear sighted documentation of social injustice to magic realism of unequalled poetic vision. Worth the prize.

He is not alone in this view. While many people are ridiculing it as a 'category error' on the part of the judges, some high profile poets, novelists and songwriters are applauding the decision. They include Salman Rushdie, Kate Tempest, Billy Bragg and Andrew Motion. Here's the link.

(And why did I choose this particular album cover by way of illustration? It was my first ever Dylan album, and I still have it – along with a number of others. 'A Hard Rain's a-Gonna Fall' is on this album.)

Email ThisBlogThis!Share to TwitterShare to FacebookShare to Pinterest
Labels: Bob Dylan, I Wish I'd Written This, Lyndon Walker, Nobel Prize for Literature 2016