Honor your father and your mother.

Thy mother does not remember her son,
whether her daughters hair
was flaxen or mouse brown,
what she ate for her last meal.
She does remember her first gelding,
what his hands felt like
when he rubbed her neck,
the song her mother sang
as they snapped beans on the porch.

Thy father remembers the scent of her breast,
the feel of her thighs locked in his,
a trout he caught when he was seven.
He does not remember her name,
when or how his father died,
his son’s job,
his daughter’s children.

They live apart together –
he in an apartment in the west wing,
she in nursing care in the south.
They see each other at Sunday service.
They do not remember each other,
but fall in love with a smile
freely offered by a long-lost lover.

Their children’s visits fade
like a kiss stolen backstage
at a third grade spelling bee. 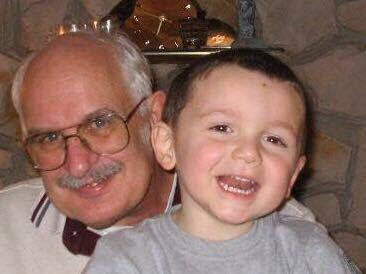 I made Gary Blankenship's acquaintance online through various poetry groups, and have come to know his poetry as beautiful, moving, and unobtrusively well-crafted.

I didn't know much else about him until I asked; then he gave me this information:

I think it's safe to say from the photo that he is also a family man – shown here with grandson Ben, whom more recent photos in the proud grandfather's facebook collection show as being in his teens now.

I first approached him in December with the request to feature this poem. Since then Books of Passion and Desire has been published and is available from Amazon: here. It was slightly delayed – by Gary's brain surgery!  Judging by his poetry and other posts on facebook, there is nothing wrong with his brain now.

I chose this poem, which deals so tenderly with brain illness in others, because I have some experience of loving people with Alzheimer's. I admire the way Gary has found the more positive and even beautiful aspects of that condition, and made us see them too. Not that he refuses to confront the tragedy of it; but he does so in a gentle, under-stated way, and shows us how the tragedy and beauty are all mixed in together in this illness. It is the adult children in the poem who are most acutely grieved; the elderly protagonists have some happy moments in the old memories and present pleasures.

It is one of a series of poems on the Commandments.

Here is the complete list of his previous publications, and where to obtain those still available:


Autumn Reflections:  Santiam Publishing 2000 (out of print, contact the publisher)

A Single Drop of Blood - Poems about West Virus Nile and other illnesses:  Santiam River Publishing 2015  Obtain from Amazon

Also he sometimes shares poems on his facebook page, and in haiku and tanka groups.

Email ThisBlogThis!Share to TwitterShare to FacebookShare to Pinterest
Labels: Gary Blankenship, I Wish I'd Written This