This week, poet friends, I thought it would be nice to hear from the men. We have poems by Nicholas V. of Intelliblog, Robin Kimber, (our beloved Old Egg), of  Robin's Nest,   Marcoantonio, of Life Whispers, and Cheong Lee San, (whom we know more familiarly as dsnake), of Urban Poems.  Each has offered a unique look at the world. And Robin has a treat for we dog lovers in this feature that will make you smile. Pour a cup of tea, draw your chairs in close, and let's dive in. Enjoy! 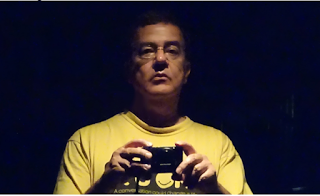 Sherry: Recently, Nicholas, you wrote a poem that really spoke to us, titled "Closed Doors". Let's take a look at it, shall we?

Our doors are closed –
Just like our hearts –
For these are hard times,
Harder than corundum
Ready to grind down
Any trace of mercy.

Our doors are closed –
Just like our minds –
Free thought causes dissent,
Dissent is disunity
And disunity is weakness:
Far easier for prejudice and fear to rule.

Our doors are closed –
Just like our borders –
For we are pure and superior,
And we do not want to be tainted
By foreign blood,
Content in our incestuous decadence.

Our doors are closed –
But some of us leave the keys under the mat:
We of the generous open heart;
We of the free, open mind;
We of the outstretched open hand;
We of the open borders.

We wait for our door to open
And lay another plate on our table
For our food’s enough for one more.
We welcome change and progress
And we embrace the stranger
For our gods have taught us hospitality’s sacredness.

Sherry: Indeed they have. I love the message in this poem, especially in these days when divisiveness is calling upon us to open our hearts and stand united with those seeking asylum from unspeakable horror.

Nicholas: I wrote this poem because of increasing instances of refugees being refused asylum being turned back to return to countries where their lives may be put at risk. Although we live in times that are hard for all of us, there is a mindset now that if we want to preserve what we have we must protect it and keep it for ourselves and not share it, especially not with "foreigners, strangers, people of other religions, people of other ideologies." This doesn't sit right with me. I have personally experienced the immense generosity of people who did not know where their next meal was coming from, yet their soul and heart were full of riches that billionaires will never have.

Sherry: I have also noted that generosity, that inner joy, in people who have very little materially. They offer what they have with open hearts. It is humbling.

Nicholas: I have experienced true Christian values from people who did not know who Christ was. And I have been given the greatest of respect by people whose ideology was diametrically opposed to mine. We can change the world for the better by opening doors and hearts and minds.

Sherry: I completely agree, Nicholas. Thank you for this.

Let's take a peek at Robin's poem next. I know it will make all dog lovers smile. Dogs are often refugees, in need of rescue, as well. 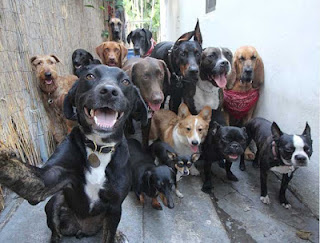 A WORD IN FOR ME

What blessings have I to account
To retell my life spent on Earth
They shuffle round in wild array
Are these judges in somber robes?

Sherry: Well, Robin, of course you know how much I love this poem. Tell us about it, won't you?

Robin: Thank you for thinking of me for the feature “Men’s Voices”.

My poems are always a mixed bag, although I am sure most readers would associate mine with love and romance. This is of course easy to do for me but when posting time comes round I always seem to have a bag full experiences to draw from to put into verse regardless of the prompt. Writing about pets is easy too if they have been part of the family for most of your life.

When the family dog died when I was about four, the neighbours' dog jumped the fence and decided us two kids next door were much more fun than the older couple who owned him. So it was that when we went out to play in the nearby fields or the woods with a stream running through it, he sensed it and came with us as we were so much more fun. Once married and with a home of our own, Maureen, my wife, thought it would be good with children on the way to have a dog for company and the same pattern was repeated with me as the big kid and the toddlers walking over the heath land throwing sticks in the ponds for Nero (Yes, black as the ace of spades) jumping in the water to cool off and maybe retrieving the stick if he felt like it.

When the family came to Australia we were in a more urban environment and didn’t get a dog until the next door neighbour pleaded with us to take a black Collie cross who had to be expelled from the farm of a relative because he had started chasing the sheep. So we had him a for a few years and his main fault was that with a dog pound fairly close to call him when he thought the bitches there were in heat. Twice I had to retrieve him from the felony of trying to break into a pound.

Robin: Our last dog was a Golden Labrador cross rescued from a pound as a present for my elder daughter who wanted a dog of her own as a teenager. She gave him the name Caesar and he immediately became one of the family. Despite having a large block of his own to play in, he decided to burrow under the fences and meet the other local dogs and chase off over the fields and in the streams and pretend they were wolves in the wooded areas before coming home for tea worn out and too tired (almost) to eat his dinner.

Eventually I made the garden fences dog proof and when my daughter was married he had to stay with us, as her accommodation did not permit pets. I was most upset when he became too ill to carry on and I had take him for his last trip to the vet and be brought home again to be buried in his favorite place in the garden.

Luckily all our pets thought they were legitimate members of the family and quite miffed if they couldn’t join in all family activities. Caesar was the only dog, however, that had the sense to go to pick the newspaper up from the front lawn and bring it inside. However he overdid it one day by noticing that there were papers on almost every other front lawn in the street and further afield, for when I looked out the window I saw he had collected at least 20 of them and placed them in a pile and when he saw me looked up waiting to be encouraged to collect a few more. So I had to be paper boy and try to locate the houses to return them to their rightful owners, quite a number of whom were not all that pleased!

So you can see I don’t regret one moment of my life with our pet dogs and thus had no difficulty in writing the poem to their tribute. I forgot to mention that each member of the family could translate Caesar’s growls, woofs and howls into English, so understanding what he was talking about was no trouble at all.

Sherry: I smiled with joy through every word of this. What wonderful creatures shared your life, my friend. I especially love Caesar, bringing home the entire neighbourhood's newspapers. LOL.

Next, Marcoantonio  has been hearing voices on the wind. Let's listen with him. 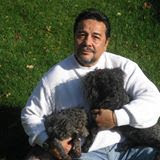 WHAT COLOR IS THE WIND

what color is the wind,
when blowing through the forest,
the flora, the fauna, the trees?

what color is the wind,
wisping across the ocean,
over rivers and over streams?

what color is the wind,
soaring above with clouds
and riding the azure sky?

what color is the wind,
i breathe as it flows through
my lungs, my veins, my heart?

what color is the wind,
that gives verve to our souls?
is it not the color of everything,

the color of all ?

Sherry: This is so beautiful, Marco. I can almost feel the wind, sifting through the trees, including us all with its touch. Tell us about this poem.

Marco: The wind is a metaphor for our souls all being connected, because the nature of our souls is the same. But I also wanted to point out the analogy that our physical makeup as living beings manifest a commonality, stardust, without a pre-existing prejudice or bias of color, of ethnicity, of race, of gender, of genetic makeup. Our souls are "one" with life, and integral in the makeup of the soul of the 'Universe(s)'.

Sherry: Well said, my friend. We are all the same in all the ways that matter. Our biggest lesson to learn as a human race.


only the dead have seen the end of war*

when i returned in the dead of nightto our little houseyou were sleeping, holding our childyour eyelids trembled, just slightlythat cold draft of airthat ruffled your hairis the howl from my throatas an arrow pierces my breast.you rose in the smoke-filled dawnwhen the sun had not yet risenover the rice fields,the tiled roofs of the town.you went to the Wall with our childscanned the stone towerswith your eyes still red with pain.you read every weary faceevery returning warriorand with each passing daythe smoke rose higher from the rains.only the dead have seen the end of war.only the dead see what your tears are for.

[*The title is a quote often attributed to Plato, but possibly written by George Santayana.]

Sherry: Your poem takes us into the human side of war, the contrast between  the woman sleeping, holding her baby, then next day her red eyes, her pain, the reality of suffering in wartime. Your closing lines are powerful, true, and so moving.

Lee San: A little background on this poem. It was the Chinese 7th month and I thought, I will write a love story, but with a ghostly twist. The setting was ancient China, during the building of the Great Wall. I pinned it to a specific time, but if you change the setting, it could be anywhere in the world. Rome, Mesopotamia, Vietnam. Then I came across this quote "only the dead have known the end of war", often attributed to Plato. And I used it as the title and, hey, do I have an anti-war poem?

Sherry: You do, indeed, my friend. Knowing the background lends added impact to the poem.

Lee San: Thank you, Sherry, for this opportunity. I think there are many talented poets in this community, male or female, and there are some very distinctive voices. Never looked back since I found this site :)

Sherry: And we are happy you found us! Thank you for this poem, Lee San.

Thank you, fellow poets, for bringing us your wonderful voices, poetry that speaks straight to our hearts, and for coming back, week after week, to share your work with us. We appreciate you!

Wasn't this wonderful, kids? I hope you enjoyed these meaningful offerings. Do come back and see who we talk to next. Who knows? It might be you!