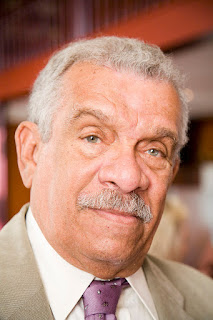 I don't know who R.T.S.L. was (perhaps some Walcott scholar among our number can enlighten us?) but I expect you know that Walcott himself died a few days ago, at the age of 87.

It must be about 35 years ago that my then husband, Bill, came home one day and told me to switch on ABC radio quick: he'd just been listening to a marvellous new poet on the car radio, a Caribbean called Derek Walcott.

Dutch-born Bill was not a poet himself but a lover of the English language and of poetry in English – like Walcott himself, who is described in Wikipedia as “an elated, exuberant poet madly in love with English”. (English is the official language of Walcott's birthplace, St Lucia, but he would also have grown up speaking patois, which he sometimes used in his poems.)

Actually Walcott was not at all a new poet in 1982 or thereabouts, but he was newly resident in the USA at that time, which may be, indirectly, how his work came to the attention of an Australian radio show.
At that stage I had not heard of him, but I enjoyed his deep, mellifluous voice on that radio program. Then I noticed the beauty of his words, and listened harder; and afterwards sought out his work.

He received  the Nobel Prize for Literature ten years later.

A splendid obituary in The New York Times gives all the important details of his life and career – so thoroughly that it has saved me the trouble of any further research. Here is the link. Do have a read!

You can find his books on his Amazon page – mostly in paperback, but some are in Kindle too.

I'll give my friend Linda Stevenson the last word and perfect summing up, with her comment on facebook after his death was announced:

"Have been re-reading lots of his fabulous poems. What a generous, clear, musical voice...he seemed to beautifully merge a metaphysical inclination with perception of the everyday."

This particular photo is made available through Creative Commons and has the citation: Bert Nienhuis - File of the Werkgroep Caraibische Letteren, The Netherlands.