—for Alan Gould, who knows the sea

When she wakes,
she wakes in the salt of breakers,
in mist that occludes and reveals night's lustre:
the great nocturnal winds
on which arctic terns bear themselves
and are reflected, silver needles
on a black glass sea.

Through shallows where gulls careen away
and rocks are seen only where the surf retreats,
she is carried out like an embryo,
into the amniotic ocean, thundering to itself
all through the humid night.

And she who swims out will not return.
Another will emerge in her place,
shaking off water.

She won't remember walking towards the sea's green wall,
her unbuckled sandals left on the dunes,
or how she grew lonely among the screens,
liquid crystal inhabitants of a country
where nothing breathes.

Once, in Sunday school, they told her
God made angels from eternity itself,
that they exist not in time, but of time,
trapped in the spaces between the temporal
and the Absolute.

Lost astronauts, unaware of the interstellar cold
in which they hang, their feathers rippled by solar winds,
a psalm heard only by their own kind:

Wandering stars, for whom it is reserved ...

They detach from kelp's shadow, waiting
for the hand of the wave to pass
and in its crash, uncoil.

She sees them levitating on the crests—
a brilliance, immense and old,
leaning out into the prow of night,
spray ionising in their hair,
and the light from shoreside tourist hotels,
razoring through their arms.

They collect in eddies,
where cobalt lies close to the horizon,
light paths
indistinguishable from the trace of time-lapsed stars—
light that has trekked billions of years,
across nebulae and novas, bears rimmed with frost
and the chairs of Cassiopeia.

She floats with her back to the shore
and knows herself
as a time-binding animal.
The fusion of past-stars and future-sea
takes place now in a simple flick of her iris. 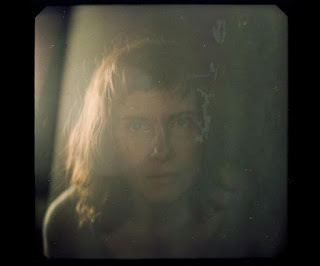 Judith Crispin is an Australian poet who was utterly unknown to me until I came across this book in the local library the other day – although it turns out we have many friends in common.

I was delighted to find her on facebook and receive permission to use the poem. She also sent me two photos to choose from; I chose this one, by Greer Versteeg, because its mysterious, half-seen quality seems to suit the poem.


This poem, spanning two pages, is by no means the longest in the book. It's refreshing to come across long poems which hold the attention by their arresting language and unusual ideas. The language is beautiful and the ideas are intriguing.

The back cover blurb tells us:

The Myrrh-Bearers is a book of love poems, describing real events and real people as the poet has experienced them. The worlds evoked in these poems are suffused with faerie tales, myth and philosophy. The genesis of this collection lies in a diverse engagement with different poetries ...


and goes on to detail those poetic influences, a long list of Europeans and Australians (Alan Gould, to whom this poem is dedicated, is another Australian poet) as well as her musical influences, in relation to 'the presence of music as a subject'.

In fact she is a musician. We are told:

Judith Crispin is a conservatorium-trained composer, photographer and poet. After escaping academia she lived for several years in Paris and Berlin on various fellowships before returning to Australia where she established exhibitions and poetry seasons at Manning Clark House in Canberra. Currently she is an honorary fellow of the Australian Catholic University and on the advisory board of the International Poetry Studies Institute at The University of Canberra.

Altogether a most distinguished and multi-talented person!

The bio she supplied at my request focuses on the writing, and goes into more detail about her life:


Judith Crispin is a poet and photographer. Her works are variously performed, recorded, published and exhibited in Australia and Europe. Judith’s first book of poetry, The Myrrh-Bearers, was published in 2015 by Puncher and Wattman. Her newest book, ‘The Lumen Seed,’ photographs, poems and commentaries, was published by Daylight Books in January 2017. Judith spends part of each year living and working with Warlpiri people in the Tanami desert, where she photographs elders and writes poetry inspired by their efforts to "grow her up".

Judith lives in the bush outside Canberra with her family, a huge mob of eastern grey kangaroos, two cats, a labrador and an abandoned dingo puppy that she rescued outside an Aboriginal community in the Tanami. Currently Judith is working on a third book of poems – an enigmatic and somewhat pointless examination of the nature of Being, set under desert stars ... with cameo appearances by dogs, snakes and talking trees.

The new book sounds wonderful to me, and so does her second one, which I have yet to catch up with.

I found her poetry in The Myrrh-Bearers fascinating, and I love this one in particular because I too am well acquainted with the sea, and don't like to be too far away from it for long, having grown up on an island and lived near coastlines most of my life. (I am not a strong swimmer, but I do like to throw myself in the water in summer, love walking on the beach – and beach-combing – at any time of year, and have done a lot of messing about in boats.)


Also I love the way she goes from the swimmer to the speculation about the angels, then the visions of them, and back to the swimmer again.

It's probably not intended (if it was, I believe she would leave more clues) but I also think of the legends of Silkies (or Selkies) when I read that the swimmer won't return but another take her place. I think she means an internal transformation — but the poems are so full of myth and magic that it's easy to start including such elements for oneself.

She is on Amazon, where both The Myrrh-Bearers and The Lumen Seed are listed. She has also written on music.

Jeltje Fanoy, whose writing I shared with you recently in Thought Provokers, was unable to register to leave her own comments on the post. She wants you to know that she very much appreciates all the comments that Poets United members made.
Posted by Rosemary Nissen-Wade

Email ThisBlogThis!Share to TwitterShare to FacebookShare to Pinterest
Labels: I Wish I'd Written This, Judith Crispin