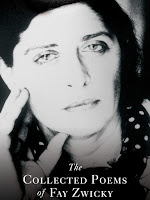 Distinguished Australian poet Fay Zwicky died a month ago ('after a long illness', the obituaries say) the day after the publication of her Collected Poems and two days before her 84th birthday. Her publisher, Terri-ann White of UWA Press, tells us she was delighted to hold a copy of her new book in her hands the previous week.

Her poetry won major awards and prizes. She was also a short story writer, essayist, critic and academic, known for her powerful intellect. In 2004 she was declared a West Australian State Living Treasure (though she herself, reclusive by nature, thought the title ridiculous).

I met her only once, when she visited Melbourne for a big poetry event – nice woman and memorable reader, exuding inner strength – but she has been part of our national literary consciousness, it seems, forever.

She grew up in Melbourne and began publishing poetry as an undergraduate of the University of Melbourne, but went on to work as a musician, touring Europe for ten years as a solo pianist. After that she settled in Perth with her first husband and two children, and worked as a Senior Lecturer in American and Comparative Literature at the University of Western Australia until her retirement in 1987.

Those who know and love her work may be surprised or even disappointed by the poem I've chosen. It's not typical. She more often worked in free verse and dealt in socio-political themes. Wikipedia says:

Recurrent themes of Zwicky's were the relation between art and the artist, the exploration of the author's Jewish heritage and autobiographical experiences.

Many of her more recent poems have focused on such contemporary cultural and political concerns as the uses and abuses of power, the problems of refugees and violence, as well as continuing her probing of family and autobiographical themes.

Zwicky also writes tellingly about the patriarchal silencing of the voices and experiences of women, as in the very funny 'Mrs Noah Speaks', part of the poetic sequence 'Ark Voices'.

The others in that sequence are the voices of various creatures, all dealing with the experience of being on the ark, and/or addressing God (as 'sir'), often humorous in tone even while saying serious things. Wolf-Song is from that sequence too, but is obviously very different from the others – non-typical even of the poems it's grouped with.

It's not that I don't admire the work Zwicky is best known for. It's just that, when I was looking for something to use, I came across this one which I had not known before, and fell in love with it. It captured my imagination.

I love the old ballads (Sir Patrick Spens, Thomas the Rhymer, The Unquiet Grave, etc. etc.) which this imitates so beautifully, even using old language such as 'thorny brake'. And I love that it is told from the wolf's point of view.

We don't have wolves in Australia, but articles I have read recently suggest that they may have been much maligned and are not usually so big a threat to humans as they have been portrayed in fairy stories and folk tales – that they hunt to eat but are not otherwise so aggressive as we've been led to believe. I'd like to think so. But the poem – in which the wolf describes himself and his mate as 'guiltless', yet boasts of ravaging sheep and slaughtering children – works for me in any case. (One could perhaps take it as allegorical, e.g. of the way revenge escalates warlike situations, but I don't think we need push that interpretation too far.)

I hope you enjoy the poem, and that you might like to investigate Zwicky's other work too, via the 259 poems collected online at Australian Poetry Library.

She also has an Amazon page where you'll find her books.

An obituary written for the book trade makes this point:

Lucy Dougan, co-editor of Collected Poems, noted that Zwicky "is attuned to the musicality of the human voice, and that's increasingly what her work moves towards. As she ages as an artist, she wants a line that is fluid and expressive but perhaps a little less freighted, a little more natural. There is this beautiful line in her journal: 'Plain speech, like playing Mozart, is the hardest to come by. Sometimes I think I am getting there.' It's quite late in her life that she says this."

Although I say the wolf ballad is atypical, she did at times play with other poetic personae and their styles. If you click on the above link to read the whole article, you'll find that it includes more instances of this.

There are several glowing obituaries. I particularly like the affectionate tone of the one in the Sydney Morning Herald.