"Tears," she said, "They distill it from tears."
So they'd said, but what exactly were they talking about?

In school she'd read about lachrymatory vials—
what was that ancient hoarding of tears all about?

Were the tears to be saved your own or someone else's?
Were the vials to be held—even hidden—or passed about?

Were bottled tears kept as relics of love's saints?
What miracles were tears supposed to bring about?

What could make tears worth saving even a little while?
Warm, they had weight; tepid, they were about nothing.

The last time she cried was so long ago, she tried again.
Cried just because it seemed to be about time.

"Tears, she said, "They distill it from tears."
She knew exactly what she was talking about. 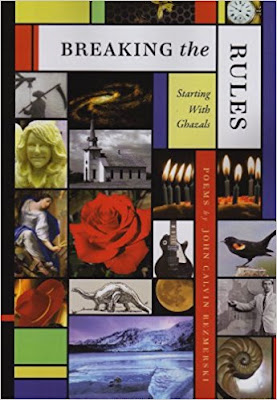 I can't find a photo of this poet which I can be sure is copyright-free, but you'll find photos of him at various of the links I'll use in this post.

Here instead is an image of the book this poem comes from: a fascinating book which a friend sent me, knowing that I love ghazals and sometimes try to write them. I so enjoyed it that, previously unacquainted with Rezmerski, I Googled him to see what else he had written and was sorry to learn that he died only last year.

The obituaries variously describe him as having been a Professor, a lecturer or Writer-in-Residence at Gustavus Adolphus College in St Peter, Minnesota. (I imagine it's possible to be all three.)

Regardless of label, he seems to have made an important contribution. The StarTribune says:

Rezmerski, known to his friends as “Rez,” spent more than 30 years at Gustavus, teaching courses in creative writing, journalism, literature (including science fiction), linguistics and storytelling. He also wrote or contributed to some 20 books of poetry, including “Dreams of Bela Lugosi,” “What Do I Know?” and “Held for Questioning.”

Friends say he was an extraordinary coach and mentor to students.
He was not celebrated for his skills as a lecturer, or for his ability to generate lots of heat and enthusiasm in his classes,” said Larry Owen, a longtime friend and colleague at the school. “But nobody in the department was better at one-on-one with the students, helping them write and think and read."

In the introductory notes to this book he gives the clearest and most succinct summary of the rules for writing ghazals that I've ever seen:

He goes on to note that 'Western poets who have adopted the form have most often disregarded most of these rules, using only the couplet structure and the associational progression.' Rather than being critical of this practice, he takes it further, saying, 'I decided to use the ghazal form as a starting point for playing against the rules, and for playing with organic form, language and subject matter ... to write a book of ghazals and quasi-ghazals, in which the poems depart deliberately from the rules, rather than simply ignoring them.'

Some of his books are still available from Amazon, though only in paperback or hard cover, not in Kindle. More books are available at his website, along with a selection of poems which can be read there.

Details of his personal and professional life are given in this obituary.

Here he is on YouTube doing a reading. He was engaged with poetry to the last, giving what turned out to be his final reading only a few weeks before he died.


PS Heaven help me, I have decided that 'Something sense of obligation' in second stanza had to be a misprint, so have altered it to 'Some sense of'.