Excerpt from ‘Young Gerard’, in MARTIN PIPPIN IN THE APPLE ORCHARD


He kicked at the dying log on the hearth, and sent a fountain of sparks up the chimney, The child threw a dry leaf and saw it shrivel, and Young Gerard stirred the white ash and blew up the embers, and held a fan of bracken to them, till the fire ran up its veins like life in the veins of a man, and the frond that had already lived and died became a gleaming spirit, and then it too fell in ashes among the ash. Then Young Gerard took a handful of twigs and branches, and began to build upon the ash a castle of many sorts of wood, and the child helped him, laying hazel on his beech and fir upon his oak; and often before their turret was quite reared a spark would catch at the dry fringes on the fir, or the brown oak-leaves, and one twig or another would vanish from the castle.
‘How quickly the wood burns,’ said the child.
‘That’s the lovely part of it,’ said Young Gerard, ‘the fire is always changing and doing different things with it.’
And they watched the fire together, and smelled its smoke,  that had as many smells as there were sorts of wood. Sometimes it was like roast coffee, and sometimes like roast chestnuts, and sometimes like incense. And they saw the lichen on old stumps crinkle into golden ferns, or fire run up a dead tail of creeper in a red S, and vanish in mid-air like an Indian boy climbing a rope, or crawl right through the middle of a birch-twig, making hieroglyphics that glowed and faded between the grey scales of the bark. And then suddenly it caught the whole scaffolding of their castle, and blazed up through the fir and oak and spiny thorns and dead leaves, and the bits of old bark all over blue-grey-green rot, and the young sprigs almost budding, and hissing with sap. And for one moment they saw all the skeleton and soul of the castle without its body, before it fell in. 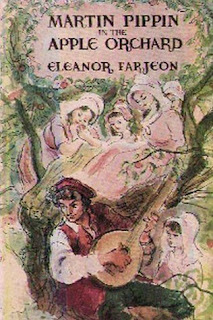 As I said a couple of weeks ago, my own post on Eleanor Farjeon inspired me to re-read this lovely book – not for the first time. I’m loving it as much as ever.

It was first written in 1922, and is a series of stories within a story.

This passage had me remembering the wood fires of my childhood, before we all had electric heaters, let alone the variety of sophisticated methods available to us now.

I loved to gaze into the fire just as the two in this story did, seeing the many magical sights in the flames and sparks, the coal and ash.

Although this is prose, I think it is such excellent prose that it blurs the boundaries between prose and poetry, and has much to teach any writer.

Above all, I wanted to share it because it delights me. I hope you enjoy it too.


Material shared in 'The Living Dead' is presented for study and review. Poems, photos and other writings and images remain the property of the copyright owners, where applicable (older writings may be out of copyright). The cover illustration I have used here shows same cover that my first copy had.

Email ThisBlogThis!Share to TwitterShare to FacebookShare to Pinterest
Labels: Eleanor Farjeon, Martin Pippin in the Apple Orchard, The Living Dead