No poem is capable of expressing life,
no lyrical phrases adequate to the task,
no bleak aphorisms suited to the tears,
no adjectives alive to expressions of joy,
no metric rhythm sufficient.
So we have to try another angle,
weep like babes torn from a mother,
laugh like kids playing hopscotch in the street,
frown like scholars pondering Sartre,
make love as if death is ruffling your sheets.
See how simple it becomes?
Love and Death dance around
autumn blown leaves,
soft lips brush your cheek
as doors close on starlings.


But, and there's always a but,
you peer around the corner of
desire and find only mist,
then touch the stars and cry
for lost words. 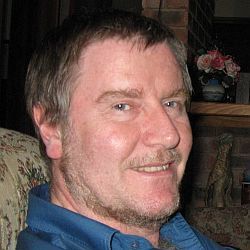 Tony Foley is an Australian poet, a friend of mine, and married to another friend I've known even longer, poet and musician Whitefeather Light. They live in Melbourne (where I once lived too) and we keep in touch on facebook.


The bio at his blog says:

I've knocked around with lots of different jobs from cab driver to forklift driver, postal clerk to pollster, but since 1989 have worked in an academic library. I've performed in plays - mostly in character roles with a Russian theatre company. In performance poetry I've been feature reader at many venues around Melbourne including The Perseverance Hotel, La Mama Poetica, Montsalvat Poetry Festival, Victorian Writers' Centre, Dan O'Connell Hotel, Westword, and even been a wandering poet at the Melbourne Wine and Food festival (that was one weird gig). I've had few poems published here and there but don't really care much about chasing publication, mostly I've contributed a piece when invited. I've been filmed for community television and been interviewed on community radio. Oh, I love reading, but that's pretty normal for a librarian.

As a book lover and former librarian, I'd have to agree with that last!

(The places he mentions are among the most notable poetry performance venues in Melbourne.)

I think most of us must have known those times he talks about, when the words seem inadequate to express the richness and depth of life itself. Of course, he does a wonderful job, here, of expressing that dilemma (smile) and creating a beautiful poem while he's at it. May all our poems 'fail' so successfully!

Email ThisBlogThis!Share to TwitterShare to FacebookShare to Pinterest
Labels: I Wish I'd Written This, Tony Foley