I shall die, but

that is all that I shall do for Death.
I hear him leading his horse out of the stall;
I hear the clatter on the barn-floor.
He is in haste; he has business in Cuba,
business in the Balkans, many calls to make this morning.
But I will not hold the bridle
while he cinches the girth.
And he may mount by himself:
I will not give him a leg up.

I will not tell him the whereabouts of my friends
nor of my enemies either.
Though he promise me much,
I will not map him the route to any man's door.
Am I a spy in the land of the living,
that I should deliver men to Death?
Brother, the password and the plans of our city
are safe with me; never through me shall you be overcome. 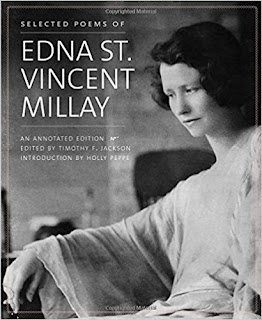 In times of war, governments are inclined to introduce conscription, the compulsory drafting of young men into the military. That makes refusing the draft a criminal offence, for which conscientious objectors can be imprisoned. In both the United States and Australia this happened during the Vietnam War. Many conscientious objectors went into hiding; many others were arrested and imprisoned.

Even when the draft was not compulsory, refusing it could be seen as an act of cowardice or a lack of patriotism, as in Britain during the First World War.

This poem suggests that the Conscientious Objector of the title not only does not wish to die too early himself but also doesn't wish to kill others – which of course has always been the main reason for such a stance. Many such men (we are talking of times when combatants were always male) chose to serve as stretcher-bearers at the front, rather than fighters. (My late husband Andrew's father was one. He survived the war.)

I like the speaker's defiant refusal to countenance Death – at the same time as making a few small jokes about him.

Most if not all of us dislike the idea of war; however a case can be made for the necessity of defending one's country or even coming to the aid of others. (I was glad when Australia and other nations intervened to stop Indonesian aggression in East Timor.) Nevertheless I can sympathise with the speaker in this poem – and with the way the poet slyly likens military service to both fox-hunting and the worst evils of slavery. A manipulative argument, perhaps, but valid enough sentiments to put in the mouth of one who is so anti-death.

It is the anti-death (rather than anti-war) message that speaks to me at present, in the wake of yet another school shooting in the US. No matter how one thinks this matter should be addressed, I'm sure we are all agreed that there has been far too much death!

A brilliant and popular poet (and a favourite of mine) Millay has appeared previously at Poets United – quoted frequently in "Midweek Motif" and featured by me in "I Wish I'd Written This", by Kim Nelson in "Classic Poetry" and by Robert Lloyd in "Poet History". Both Kim's and Robert's articles detail her life story, if you'd like to know more about her.

Her books are still extensively advertised on Amazon, where several biographies also appear.