A kiss goes from mouth
to mouth, and then away. Venus turns
on her axis, every 243 days. Mae West starred
in a movie, called She Done Him Wrong.
We cry over spilt milk, and onions. Crying is
the language, of the eyes. A ring, is a hole with
a rim, around. Tom asked a girl, if she'd marry him.
–She said, No.—Sketches, squiggles, scribbles,
gnashes, and twirls. An omelet, is a crash.
After the heart, nothing but, a labyrinth.
Folly is a Man, biting stones. (Folly is a Man who
can't find a girl). Folly is a man, who can't
walk home. Tom threw a rope, over a beam in
the toolshed, and hang himself. His father
saw the shadow / struggling in the light, ran out, and
cut him down. Tom was charged, with "attempting to commit
suicide." (There is no substitute, for blood).
The father came to the Court (to lend
support), and told the Judge, as a Fool thinks
so does a bell * clink. A page is, both
sides of a sheet of paper. Surely a stutter
causes, no offence. Kepler reconciled Astronomy
with Physics, and then it was Tom's turn
to lay out the cards. He said, past tense, means
never again (so help me God) — the Father, the Son, and
the Holy Ghost. The liver of a Lion (for a cub), was
a vain wish, for a young man. The Judge
then said, every Jack has his Jill, and when
a drought comes, all good trees have to
just tough it out. He then sent him home, to
get on with his Life.

I have become rather wary of posting poems with a lot of Australian vernacular, as they are not always well understood by people from other countries. (We think we all speak English, but....) This poem is even worse, very strangely punctuated and full of apparent non-sequiturs. However, I'll risk it again, because what Pi O is doing is well worth drawing to your attention. 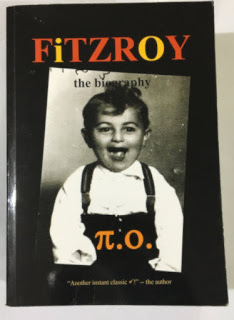 It is from a very thick volume (740 pages) which my son and I were delighted to find when we went book-shopping together during my visit to Melbourne last November. (My son has a great appreciation of Pi O's poetry too. We each bought a copy; and, for any Melbourne people who may see this, the bookshop was Readings in Carlton.)

Pi O is among other things a great chronicler. In this case he chronicles, through its people, the history of the inner Melbourne suburb of Fitzroy, where he grew up – after coming to Australia from Greece with his family when he was three.

His brief Wikipedia entry describes Pi O accurately as "a Greek-Australian, working class, anarchist poet", and goes on to say:

His work ranges from standup-type rants to 'conceptual' page poetry and concrete poetry, with a heavy emphasis on wordplay and capturing the vitality of everyday speech. Thematically, he commonly portrays the issues of non-Anglo-Celtic working class life.

He uses typography, among other devices, to convey the nuances of speech patterns. In a previous thick volume, Big Numbers he set out to capture the flavour of migrant speech. Not having grown up in the same area, I found it challenging to understand the dialogue – and as the book is mostly dialogue, it remains rather difficult for me. This one, beginning way back in a time when the citizens of Fitzroy were mostly of Anglo-Celtic origin, is easier for me.

I'm not sure if it would be for non-Aussies. But give this poem a try. Some of the commas look as if they are grammatically in the wrong place. Indeed, grammatically they often are. But read it aloud, pausing at those commas, and you'll get the sound of the speech patterns. For the same reason, sound out the emphasis on the words in italics.

(Note: I think "An omelet, is a crash" means that "omelet" was slang for "crash" – as "crash" is slang for "vehicle accident"– at the time when the poem is set. It isn't now.)

He must have done a huge amount of research. The subjects of the poems are real people and events. Some of the people are public figures; most are ordinary folk like Thomas Gesses, who for some reason got into the news and/or police reports. Their brief biographies, told chronologically from the late 18th to early 21st centuries, add up to a biography of this working-class suburb itself. (Working-class until recently.)

Not an autobiography as such, it would be background material for one – and does in fact include some autobiographical pieces in their correct chronological place in the record. (And so it should. He too is one of the people who form the story of this suburb.)

It's a fascinating record. In a way it's a pity to take one poem out of context like this, as what they all add up to is greater than the sum of the parts. This is one of the shorter poems; some go for several pages.

The thing I find most thought-provoking is the poetic style. Pi O has always been interested in accurate renditions of whatever he observes, even if there are differences in the ways particular kinds of poems make their impact. In this book the pieces seem very factual, with a documentary style of telling – as you see in this one poem. But then, what are all the interpolations in the story?

Well, it's a long time since I was in touch with Pi O, so I can't ask for his personal explanation. But it seems to me that the events of the poem are set against a background of the mass consciousness of the day: the way people thought about things, their preoccupations, the level of their knowledge of what was going on around them and in the wider world, and the sort of information which people took for granted about their world in that time.

I like the way the personal details and the broader picture are interwoven. We know more about Thomas's life because it has been given its social context. For instance, the movie She Done Him Wrong came out in 1933, when Thomas would have been 34 years old. So it's not there just as commentary on his romantic situation, though it functions as that too; it's part of the mass consciousness which formed a backdrop to Thomas's personal circumstances, and perhaps shaped or at least influenced them in some ways.

His first published book, Fitzroy Brothel, was released in 1974. From 1978 to 1983, he was involved in producing the radical poetry magazine 925. After the publication of several more collections, his 740-page epic poem 24hrs was published in 1996 by Collective Effort Press.
He is a fixture of Melbourne's performance poetry scene and has edited an anthology of performance poetry (Off the Record) for Penguin. His most recent book is Big Numbers: New and Selected Poems (2008). He currently edits the literary journal Unusual Work.

Obviously it hasn't been updated since 2008. However it does also list in the Bibliography another anthology he edited: Missing Forms, a concrete poetry collection. These days "concrete poetry" is often understood to mean what is also called "shape poetry". That is indeed one kind of concrete poetry, but this anthology also includes much more startling ways of arranging words pictorially. Pi O has always been innovative and cutting edge – sometimes a leading force amongst others with similar convictions; in his maturity doing some things which, as far as I know, are unique.

I've discovered that collective effort press has a facebook page where if you scroll down you can find a photo of the adult Pi O as well as another of his poems from Fitzroy. This would be a place to enquire about buying copies of his books, if you don't live near any bookshops that stock them.

The Sydney Morning Herald interviewed him about this book, resulting in a much more interesting account of his life and work than the Wikipedia entry. If you do a Google search for "Pi O poetry" you'll find other interesting material, such as a spoken interview on national radio, various other interviews and articles, and some visual poetry.

And I just found out that a brand-new friend, poet Sarah Temporal, has written a lovely homage to Pi O in brilliant Pi O-influenced verse and her very own beautiful prose. Here it is; don't miss it!