The farm is our mother in her birthday suit.
Our father drives a tractor across her hips
and sows children in her bones.

The totem animals run through her veins
and the winds press the grasslands to her lips.
Every contour of her fertility is a waterhole
and beneath her belly is the aquifer of our living allowance.

The sun beats her by day
and the moon pities her by night.
and when the rains come she puts on a new dress
and shakes the flowers from her daughters.

She runs the seasons through her hair
and her sons come home to harvest.
The grain spills out so much the birds can't leave the ground.
The cattle fatten themselves to death
and the mice plague her sleep.

Then father burns her summer dress
and turns her skin to fallow.
Her sons follow the dollar downriver
and she has make up sex with the sun. 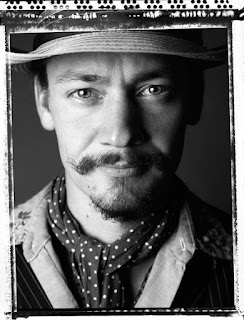 I met Ben Wild at the same poetry reading where Robbie Wesley read the poem I featured last week.This – obviously – was another of the poems on offer that night which really appealed to me.

You may recall, the theme of the evening was "Love Poems for the Earth". I do see the Earth as our mother, and I like the personification this poem gives her. This mother is a long-suffering one, as many human mothers are – only even more so. The last verse says it all, unequivocally. A harsh poem, you might well think, yet born out of great tenderness for the Earth our Mother. When he posted the poem on his facebook page on International Women's Day, he said he wrote it "when thinking about my two Mums – both biological and environmental – and how they both tolerate and create in equal measure."

"But we need our farms!" you might protest. Yes ... but some of our farming practices are not good for the planet. In a way, the poem seems to say that the whole Earth is a great farm; and in a way that is true. At least, before there was farming as we know it, tribal peoples lived off the land. They didn't necessarily have to cultivate crops at all. Well, I suppose that, for most of us, there is no going back to a nomadic lifestyle, but we might still find farming practices which nurture rather than harm the planet – and we'd better, if we ourselves hope to survive.

The photo comes from Ben's website, as does the following biographical information.

Benjamin W Wild was born in 1979 and grew up on a property between Quambone and Warren in Central New South Wales.
He has studied, worked, lived, dreamt and travelled, and continues to live himself to death in a manner of ways- be they old, boring, exciting, different or new.
He talks in the third person when filling out the kind of social documentation that compels people to think that it gives them an air of seriousness and professionalism, but not as much as he talks to himself.
No I don’t.
Yes we do.

He has been published in various other publications, has often been a featured reader at poetry events around Australia, has been placed in several awards, and in 2016 won The ‘Arts Queensland XYZ Prize for Innovation in Spoken Word’.

Email ThisBlogThis!Share to TwitterShare to FacebookShare to Pinterest
Labels: Benjamin Wild, I Wish I'd Written This