It is enough
to watch a sunset

It is enough
that the other knee feels fine

It is enough
that in dreams you can still fly

It is enough
that poetry is in the bible too

It is enough
that gifts
come in the size of gratitude

– Neil Meili
from "Enough Poetry and a little more..."

I featured Neil here a few years ago, with one of his wonderful environmental poems – wonderful in its restraint, while simultaneously packing a mighty punch.

He and his partner became my dear friends when I stayed with them on a poetry visit to Austin, Texas in 2006. We've kept in touch.

They had occasion to visit Australia in 2016, and I was able to spend a few days with them, and also take this photo of Neil. A treasured time – and, as in all the best friendships, it was as if there had been no gap between get-togethers.

You can tell from the photo that it was a happy reunion! He and I even spent one afternoon sitting on a verandah overlooking a lake surrounded by trees, writing poems together. 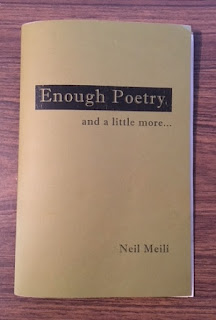 Neil self-publishes chapbooks more-or-less annually (sometimes twice a year). He himself does all the physical production of them, which is simple and attractive. I'm privileged to be on his mailing list. I received the latest – pictured here – two days ago. And there I found this wonderful poem I've just shared with you, as well as lots of other treats.

That's twice I've said "wonderful" about his poetry. This poem embodies the original meaning of the word: "full of wonder". So do many of his others. And to me all Neil's poetry is also to be wondered at, for his mastery of a simplicity in language that can also be complex in meaning and often profound.

He excels, too, at short, sometimes aphoristic verse such as:

Senior moment mostly
forgetting that I am one

PUTIN ON THE RITZ

(He calls such pieces "string too short to save".)

A long-time resident of Texas, he also returns often to his native Canada, as well as travelling to other countries. There are references to both Canada and Texas in his poetry, and also to some of those other countries. His partner, Dorsey Cartwright, is a psychotherapist who sometimes presents self-development courses with a psychological basis, specialising in relationships, all over the world. Neil takes a close interest in her work (as she does in his poetry) and many of their travels are associated with this work. That's how they happened to be in Australia in 2016, and one of their venues was close enough to my home for me to go and visit with them. Here's another pic I took, of the two of them. 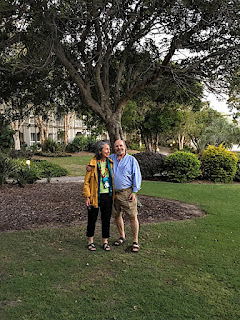 Neil has long been active in spoken word poetry in both Austin, Texas and Edmonton, Canada, and is generous in his encouragement of other poets.

On his website, where you can read more of his poetry, he describes himself as "Zen cowboy poet & freelance philosopher". He does retain an air of the outdoorsy, adventurous fellow he has often been during his life. Look a little closer and you discover he is also a polished sophisticate, an erudite art-lover, and above all a kind, caring, sensitive person. All these facets are expressed in his poems, along with his wit and sense of fun.