Man comes and tills the field and lies beneath.
Tennyson

Over before you knew it,
misdiagnosed and done for,
you became some ashes a little plaque a case history;
paintings you did are lost, also your poems,
nothing but ashes in a wall of death is left.
You will not see again the way
the morning sun floods down O'Connell Street . . .
perhaps you are the sun now;
perhaps not.

Childhood was the salt edge of the Pacific,
was the school under the old trees;
soon they disposed of you.
I went to the funeral you and I were the only two
there really the only two who knew the gods had gone;
death and morning the only two,
damned because poets.

Over before we know it,
we pack our lives in souls and go
out with the tide the long procession
the ant the elephant the worker the child
even those doctors who stood around will die sometime,
their money cannot buy them out of it.
We know what is to come a silence teeming
with the unfinished spirits good and bad,
and how we've lived determines what we'll be
next time around, if time's not buried with us. 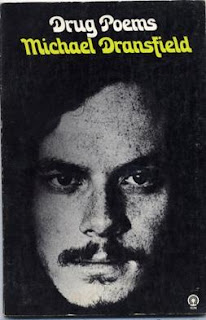 I didn't realise until some time afterwards that the 20th of April was the anniversary of Michael Dransfield's death, so missed the opportunity to post a poem of his on that day. But then, any day is a good time to remember one of my favourite poets.

This elegy he wrote for an unnamed friend is perhaps a gloomy choice, yet seems fitting. For one thing, having read a lot about Dransfield as well as everything he wrote, I know that his own childhood also "was the salt edge of the Pacific ... the school under the old trees". I don't mean they were children together in the same city and the same school. They may have been for all I know, but "O'Connell Street" suggests his friend lived in Adelaide – at least at the time of his death – whereas Dransfield was a Sydney boy.* But most Australians live on our coastal fringe rather than in our desert centre, and Australian schoolyards typically have old trees growing. In Dransfield's case, there is plenty of written evidence of both.

And then, his friend was a poet too, he says. He seems to have regarded poets as doomed. Elsewhere he calls being a poet in Australia "the ultimate commitment". Trying to put poetry first, above any other career, can certainly be a precarious living! I think it's safe to say most Australians are more interested in football than poetry (but I expect that applies to other countries as well).

Perhaps Dransfield feared his own poetry would be lost too, after he died. The opposite has happened. Wikipedia informs us that he 'wrote close to 1,000 poems. He has been described as "one of the most widely read poets of his generation." '  I imagine this applies mostly in Australia, where, even though he died 45 years ago, his readership keeps growing and new young poets still cite him as an influence. (He had three books published by the time he died, but not when he wrote the above poem. Several other books appeared posthumously. The photo above, by an unknown photographer, is on the cover of one of the books published in his lifetime.)

I also chose this piece because it demonstrates his craft. Look, for instance at his line endings in this poem, and the various places where commas are lacking even though one might expect them. Then look at how that makes you read the poem. Perfect emphasis, perfect pacing. And there is the way you HAVE to emphasise and slightly linger over "floods" in line seven. This did not happen by accident. He was a master craftsman who gave great attention to such details.

I featured him in "I Wish I'd Written This" in 2011 (before we started "The Living Dead") in a gentler mood, along with some details about his life and where to find his poetry. The biggest collection of it online, plus a comprehensive biography, is at Australian Poetry Library. Enjoy!

* I shared this post in an Australian poetry group on facebook, and a reader there points out (correcting my ignorance; I am no Sydneysider):

"O'Connell Street is also one in Sydney. My guess is that it was there the sun shone down between that corridor of light. He referred to both of them as having 'childhood on the edge of the Pacific'...very much a Sydney setting."

This does make more sense.

The book cover photo of Michael Dransfield is available according to Fair Use.