YOU FIT INTO ME


you fit into me
like a hook into an eye

a fish hook
an open eye 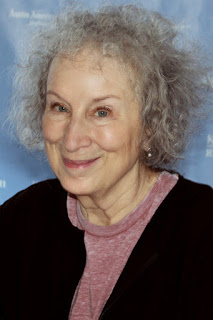 I was gob-smacked when I first read this poem in the early 70's. At that time, I was disengaging from my own personal fish hook. I read some of this author's early fiction as a road map out of oppression into feminism and the light of a new day.

Born in 1939, Margaret Atwood is one of Canada's best-known and most celebrated writers. She began writing plays and stories at the age of six, and was first published in 1959.
She has a huge body of work, both poetry and fiction, which can be found here. Some of her books have been made into films and tv shows. Perhaps the most talked-about right now is the tv series The Handmaid's Tale, from her dystopian novel of the same title, originally published in 1985, and now considered prophetic. The premise of this novel (and tv series) is the overthrow, at a time in the near future, of the U.S. government by a totalitarian, Christian theonomy. It explores the themes of women in subjugation to a patriarchal society. The setting is New England, with Canada the supposed best hope for escape. A timely theme.
Atwood notes that sales of this book increased after the U.S. 2016 election. No wonder! The political action group, The Handmaid's Coalition, was formed to protest legislated decreases in the hard-won rights of women and minorities, slipping away faster than we can comprehend. 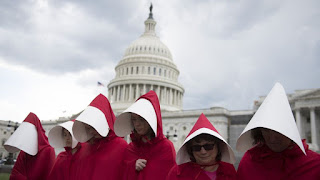 The Handmaid's Coalition is now a movement in itself,
in response to political trends targeting women and minority groups:
"Fighting to keep fiction from becoming reality"
Margaret Atwood has been a controversial writer and political figure since she first appeared on the literary scene. She is a humanist, a feminist and an environmental activist, and her work reflects this. Comparing the two genres, she has said:
"With a lyric poem, you look, meditate, and put the rock back.
With fiction, you poke things with a stick
to see what will happen."
Let's take a look at another poem:

THE MOMENT
The moment when, after many years
of hard work and a long voyage
you stand in the centre of your room,
house, half-acre, square mile, island, country,
knowing at last how you got there,
and say, I own this,

is the same moment when the trees unloose
their soft arms from around you,
the birds take back their language,
the cliffs fissure and collapse,
the air moves back from you like a wave
and you can't breathe

No, they whisper. You own nothing.
You were a visitor, time after time,
climbing the hill, planting the flag, proclaiming.
We never belonged to you.
You never found us.
It was always the other way around.
I couldn't agree more. This writer has had a stellar career, and her bio, listing her many awards and accomplishments, her career teaching at various universities, and her current projects and appearances, can be found at her website: Margaret Atwood.

Material shared in 'I Wish I'd Written This' is presented for study and review. Poems, photos and other writings remain the property of the copyright owners, usually their authors.
Posted by Sherry Blue Sky