time in a pelican's wing

stationary
as elders or royal relatives

immobilized
by an absence of light

like knives & forks
stuck upright
in mud for the night

day will have them up
using themselves
differently

as the nameless
brands of water

were formed and disappeared

today lake george
is the clearest of soups–

what time is left
in the flight of their wings–

unlike humans or sun
they are not
big drinkers of lakes

they will dribble back the water
keep the fish 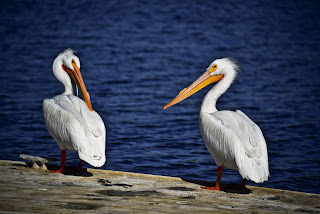 I could almost as well have included this poem in the 'I Wish I'd Written This' series – except that I would rather wish there was no occasion to write such a poem. Given that there is, she writes it well.

But surely we know all this stuff already? What's so thought-provoking about it?

Well perhaps just that – that we have become blasé about all the small-but-not-so-small environmental disasters, because there are so many and Governments act so slowly and we feel so helpless....

Or perhaps what is thought-provoking is the fact that this poem was published in 2000, and quite possibly written even earlier. Has there been much change since?

In the case of Lake George it might be hard to tell, as it is unusual – what is known as an endorheic lake. According to Wikipedia, it is 'long, largely flat and extremely shallow, with a very small catchment.' It can easily dry up from evaporation and may stay dry a long time, from days to years, before filling again. But regardless of the idiosyncrasies of this particular lake, the point she is making remains. Everyone is now more aware, yet there are still many places where pollution is not addressed.

I could place this poem in 'The Living Dead' too, as J.S. (Jann) Harry is no longer with us. It's a little shocking to me to note we were born in the same year. She was a well-known Australian poet, author of eight books of poetry and recipient of various prizes and awards for her writing, and also worked as an editor and academic. I never met her personally but have admired her poetry for decades.

She was born in South Australia, but spent most of her life in Sydney. She began writing and successfully submitting poems and stories when she was a child. When she began being read and appreciated as an adult poet, her style was innovative and she was credited with paving the way for other poets seeking new ways of expressing an Australian sensibility.

In 2007 Peter Porter, himself a distinguished poet, described her as 'the most arresting poet working in Australia today'. Dorothy Hewett, another wonderful poet, called her 'a skylarker with language – stylish, intense and original.'

In a long and tender obituary, Professor Ivor Indyk calls her 'our first and foremost ecological poet' because of her 'attentiveness to the life of animals'.

I could keep on quoting accolades, but after all the poem's the thing. I love that she's such a visual poet in her highly original yet accurate descriptions!

J. S. Harry was known as an intensely private person, and the few photos I can find of her online are subject to stringent copyright – but if you are curious, I like the photo used by The Sydney Morning Herald in its obituary – an obituary which has some interesting reading in its focus on an alter ego she often used in her poems, a philosphical rabbit!


Material shared in “Thought Provokers’ is presented for study and review. Poems, photos and other writings remain the property of the copyright owners, usually their authors. The Pelican image is in the Public Domain, licence CC0.