We have an amazing feature for you this week, my friends. Robin Kimber, whom we affectionately know as Old Egg, and who blogs at Robin's Nest, is chatting with us about his memories of being a young lad in London during World War II, when bombs, blackout curtains and gas masks were part of normal life. I find his a fascinating story. Pull your chairs in close. You won't want to miss a single word.

Sherry: Robin, when you look back, what do you remember about being a child in London during World War II? 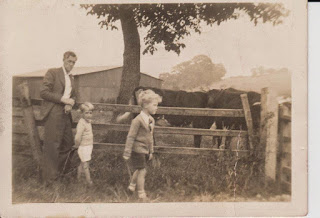 Robin, about 1940, with his father
and older brother

Robin: We kids ran free, even though it was wartime, with army bases close by and planes flying overhead. But we knew no other life. We climbed trees, waded streams and caught tadpoles and fish in there or in ponds. We pretended we were soldiers just like our dads or uncles but with sticks for guns.

Sherry: Were there signs of war that you took for granted as part of daily life? 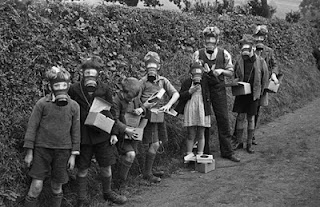 Robin:  We had to carry gas masks to school until it was considered safe. When the air raid siren went off a teacher led us to an air raid shelter across a school field. Most side streets had a communal air raid shelter built on the road itself, allowing one vehicle to pass.

As there was strict petrol rationing, that was fine, as there was so little traffic. If your parents had a car, which mine didn’t, it was put in storage. Petrol rationing was severe, and available mainly for commercial use only.

Many families had their own air raid shelter in their own gardens, so they didn’t have to run to a communal one some way from their home. Once or twice an announcement was made at assembly that a classmate had been killed in an air raid.

We had no air raid shelter at home. During air raids we slept downstairs, under the dining room table or under the stairs. Luckily for us there were no bombs dropped close to our house. Living a few miles from an army base, the streets were filled with army vehicles, gun carriers and tanks. 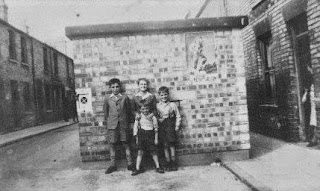 Sherry: It is very meaningful to get this real-life glimpse of children's lives during wartime, my friend. Sadly, too many children are still experiencing its horrors.

I would like to include one of your poems here, if I may:

As under the table
We crept all wrapped up tight
For kids it was fun
Parents were anxious, scared

The planes rumbled above
As wrapped up in her love
We slept peacefully
Innocent, unaware

We woke up in our beds
T'was like every day
I went off to school
Through smoke, rubble and fire

Robin: We lived about 37 miles from London, in between the major Army base at Aldershot and the town of Farnham, Surrey. Luckily we were midway between the two, so only a few bombs nearby by accident! Later on the Doodlebug rockets fell at random when they ran out of fuel, but everyone soon leaned that if you heard the drone of the rocket you were safe, for it was only when the engine stopped would the rocket fall to Earth. Us kids were playing cricket in a field one light evening; we heard one fly overhead but, hearing it, we knew we were safe! 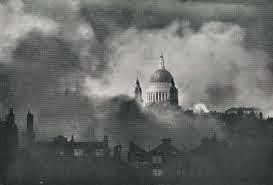 Britain was bombed through much of the war, especially the industrial cities, docks and military establishments. Children, however, adjusted easily in wartime, so our bargaining tools at school were bomb fragments and shell casings, our toys were planes and tanks and cigarette cards, which were no longer in cigarette packets, so some series were highly valued. Worn or unpopular designs were used to play a card-flicking game trying to get yours closest to a wall! 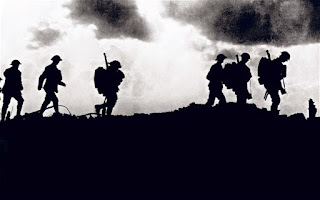 The war was raging
Housing appropriated
For the duration

Sherry: Yes, we honor them indeed. They fought a hard battle to preserve democracy from fascism. I know your father had a very important job during the war. Would you tell us about it? 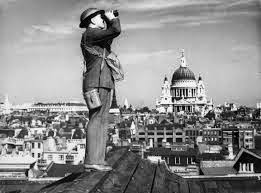 Robin: My father’s job was to help maintain the electrical power system in London. He also he did compulsory fire watching, as London was being bombed with incendiary bombs that set fire to buildings, necessitating him staying at work all night as the power stations had to be protected. So he and other workers sat on the roof all night with buckets of water and sand to douse them. This meant our mother and us two boys had to cope alone, hoping he would return home the next day.

For kids, though, war was exciting. My brother and I would be so pleased when Dad came home from the midst of the bombing with chunks of shrapnel from burst bomb fragments. All kids would collect what they could to show off to other boys, and we were always pleased to have him as a source of collectibles!

Families were often split up through the war or shifted to safer housing with a relative further from the bombing zones. After the port of Southampton on the south coast was bombed, my wife Maureen’s aunt and cousin came to came to live with her family until war’s end. 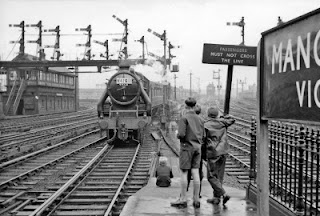 Sherry: Such a time of turmoil. I am amazed by your lack of fear. But then you were very young. Your parents must have done an admirable job of making you feel safe, amidst such uncertainty.

Robin: It was only after the war that I fully understood the gravity of war and the effect it had on everyone. In the main, those uncles that came back from serving overseas were not keen to talk about their experiences. My favorite uncle who had served in North Africa, Italy and Austria couldn’t, as he had seen too much and couldn’t share it.

Both Maureen, my wife, and I lost uncles in the war, both in Europe and in the Far East, particularly in German and Japanese prison camps. Meaning some of our young cousins grew up not knowing their fathers who had died.

Sherry:  My favourite uncle served in the RAF in those years. He could never talk about what he had seen either. He had such sadness in his eyes. Your uncles must have suffered terribly in the prisoner of war camps.

I would like to include another of your poems here, if I may: 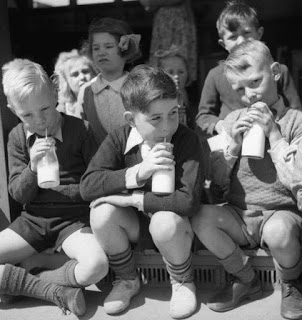 Food was very scarce
Everything was rationed then
Except mothers love

Sherry: I am sure there was cheering, at war's end.  Is there an especially vivid memory you have, of a defining moment of the war? 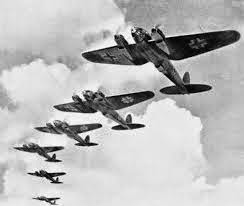 Robin: Man had not been flying for 40 years, but the skies were full of planes. We boys could identify them by wing shape and the sound of their engines.

On one of the last days of summer 1940, our family spent the afternoon on the Hampshire downs. In that glorious setting, we watched a dogfight overhead – tiny planes droning and firing and circling and falling on that dying day of summer. It was the culmination of the Battle of Britain, a deciding point in the war. The action that day was proof to the British that we could win despite the odds.

Sherry: My goodness, Robin, that sounds amazing. It is like you lived in all the movies I ever saw about World War II. It must have been glorious when the war came to an end.

Robin: The war ended, but not the privation of those dreadful years. There was not much of anything in the shops. Rationing continued for a few years. With no television, our great pleasure was to visit the cinema, to watch a grey film in that grey town in a grey country in those grey times.

Sherry: What an amazing childhood you had, my friend, and what heart-stirring memories. Thank you so much for sharing these vivid recollections with us. It has been such a privilege to have this chat with you. We thank you from the bottom of our hearts.

What a very special chat this has been with our beloved Old Egg. We are sure it has been meaningful for you. Do come back and see who we talk to next. Who knows? It might be you! [If you have an amazing story to tell, email me and we'll chat!]