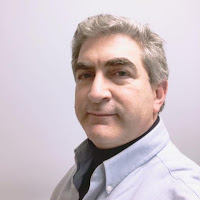 Jason Goldfarb contributes to Haiku on Friday, a facebook group I administer, reposting from his blog, Iron Haiku. These are a random selection from those I especially liked – difficult to choose, as I tend to like most of them.

I have been intrigued by his habit of posting pairs of haiku, one with 5-7-5 syllables, the other the shorter form known as English Language Haiku. He explains:

My writing is typically based on the 575, then I figure the theme from that and then write the ELH Haiku to fit. Most of the time I’m writing to beat my self imposed deadline of midnight.

Initially I wrote only the 5-7-5, as that was what I was taught haiku was in school. I still enjoy the restrictions the syllabic restraint provides, I feel it makes the writer think laterally in order to craft their work to fit the structure. After writing that way for a while and posting my work, I began to get critiques from poets who attempted to educate me on the broader strokes of Haiku, and also on the genre of English Language Haiku. I balked at first, but after some research I thought I might give it a try and found I did indeed like it. The concept of writing both to reach to a wider audience appealed to me, and I liked the idea of making the work a couplet, linked by the hashtag, even if only tangentially. I’m fond of thinking that the reader might come to the same conclusions and see the same images I did when I was writing, and possibly even see the link between the two as I do. Ultimately though, the imagery is up to the reader, I can only hope the poems provoke some thought and that they get some form of enjoyment from reading my work.

I always enjoy reading both versions (and particularly like the fact that they can differ in content whilst addressing the same theme) but I find myself usually preferring the shorter one – not, I think, merely for the further brevity in itself, but the immediacy it produces.


I asked Jason to tell me a bit about himself for this feature. He responded:

I live with my wife and daughters in a small suburban Connecticut town with some remaining rural accents. It’s close to the shore, but you still have to drive to get there. In town we have a few horse farms, a fair number of people keep chickens, and there are even some llamas! All in all a wonderful community, with good schools, caring people, and a great family atmosphere.

I grew up not far from Yale University in New Haven, Connecticut, went to public school and then to the University of Connecticut. I have a degree in fine art that is somewhat languishing in a corner somewhere. I work as a computer consultant and spend the bulk of my time working, raising my family with my beautiful wife, keeping house and managing all the day to day things a partner in a two income family does. (My wife does way more…). To unwind I do word puzzles, read (not enough), and we watch as much quality BBC programming as we have time for.

His relationship with one of his daughters has everything to do with his haiku habit. As explained on the blog:

The idea for this blog started out as a simple exchange of text messages between myself and my daughter Samantha. Every once in awhile, when I thought of it, I would send her a text with the heading “Your Daily Haiku”. This was followed by a haiku of some sort just based on whatever I felt like writing that day. ... After a time, she began to respond to me in kind and before long we were having extended haiku battles via text messaging.

I thought a wider audience with some more participation would be fun, and so, the Iron Haiku was born. I started by posting a status update starting with “Iron Haiku”, and then added a secret ingredient, something the haiku would be about, even tangentially. I then posted a haiku and waited. The idea was that people would see it, maybe like it, and hopefully post a response in haiku form as well.

He went on to invite participation from other writers. 'Why iron?' I asked him. He said:

The iron in Iron Haiku was inspired by the Food Network’s program Iron Chef. The idea was that each Haiku would have a theme or keyword, and that would be the key ingredient, a starting point for the poetry. This would be shared by me and others could write their own variants on the theme. On paper, a nice concept, in practice, it never really panned out. I keep doing it out of habit now, I guess.


I asked, 'And do you write other stuff too?

At the moment, no. Being a father, a husband, working full time, and all the other responsibilities of life afford me little time for the distractions of creativity. That’s ultimately why I chose haiku; I can write and post in a span of 30 minutes or less if I’m inspired. Typically that’s just before I turn out the lights at the end of the day. Some day I hope to get back to my roots in the visual arts, specifically sculpture and figure drawing. Maybe if I’m feeling particularly motivated I’ll compile some of my work into a book, but that’s a fantasy for now.

In the absence of a book, we can be grateful for the blog. I'm also glad he posts to Haiku on Friday.

Email ThisBlogThis!Share to TwitterShare to FacebookShare to Pinterest
Labels: haiku, I Wish I'd Written This, Jason Goldfarb