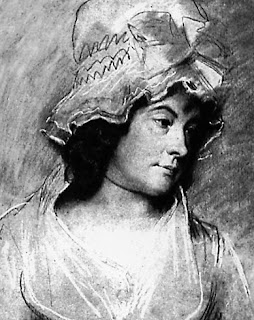 The Sea View
The upland shepherd, as reclined he lies
On the soft turf that clothes the mountain brow,
Marks the bright sea-line mingling with the skies;
Or from his course celestial sinking low
The summer sun in purple radiance glow
Blaze on the western waters; the wide scene
Magnificent and tranquil seems to spread
Even over the rustic's breast a joy serene,
When, like dark plague-spots by the demons shed,
Charged deep with death, upon the waves far seen
Move the war-freighted ships; and fierce and red
Flash their destructive fires--The mangled dead
And dying victims then pollute the flood.
Ah! thus man spoils glorious works with blood!
1797


Charlotte Turner Smith (1749-1806) was an English poet and novelist whose works have been credited with influencing Jane Austen and particularly Charles Dickens. As a poet, she is a Romantic; as a novelist, she falls into no particular pigeon-hole, but is in some respects Gothic. Smith is also very much interested in social conditions (the influence on Dickens is clear here) and in politics -- specifically the French Revolution. Born into a well-to-do family, Charlotte Turner Smith was brought up in South England. At the early age of fourteen, she was married to Benjamin Smith, the son of a wealthy East Indian merchant. However, his wealth did not last and in 1783 Charlotte shared his imprisonment for debts with him for several months. At that time she decided to publish some of her poems to support her ever increasing family. The volume "Elegiac Poems" of 1784 was an instant success. Charlotte put down her thoughts the form of sonnet, a form which since Shakespeare's days had come out of use. Her poetry, famous for its melancholy and sadness, became highly popular in the following years.

by A.M. Trumble
Posted by bttrflyscar