Classic Poetry - "On a Bank of Flowers" by Robert Burns 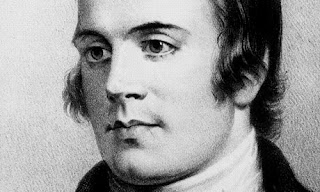 
As the season heats up, how could I not post a poem highlighting classic summer love?

With "On a Bank of Flowers," Robert Burns sets a breathtaking summer scene and tells a complete tale of distant yearning, admiration, encounter and resolution in a mere four stanzas.

On a Bank of Flowers

On a bank of flowers, in a summer day,
For summer lightly drest,
The youthful, blooming Nelly lay,
With love and sleep opprest;
When Willie, wand'ring thro' the wood,
Who for her favour oft had sued;
He gaz'd, he wish'd
He fear'd, he blush'd,
And trembled where he stood.

Her closed eyes, like weapons sheath'd,
Were seal'd in soft repose;
Her lip, still as she fragrant breath'd,
It richer dyed the rose;
The springing lilies, sweetly prest,
Wild-wanton kissed her rival breast;
He gaz'd, he wish'd,
He mear'd, he blush'd,
His bosom ill at rest.

Her robes, light-waving in the breeze,
Her tender limbs embrace;
Her lovely form, her native ease,
All harmony and grace;
Tumultuous tides his pulses roll,
A faltering, ardent kiss he stole;
He gaz'd, he wish'd,
He fear'd, he blush'd,
And sigh'd his very soul.

As flies the partridge from the brake,
On fear-inspired wings,
So Nelly, starting, half-awake,
Away affrighted springs;
But Willie follow'd-as he should,
He overtook her in the wood;
He vow'd, he pray'd,
He found the maid
Forgiving all, and good.


Nelly and Willie must have lived happily ever after, don't you think?
Posted by Unknown