Revenge of the Trees

There will come a time - maybe soon

but there may be a problem
with the breath 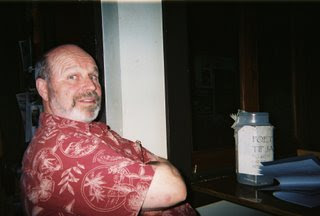 Neil Meili is a Canadian who has now lived a long time in Austin, Texas — though he still makes frequent visits back home too. He and his partner, Dorsey Cartwright, a psychotherapist, kindly put me up when I visited Austin in 2006 for the (annual) International Poetry Festival. They instantly became family.

Thom the World Poet, who many years ago initiated the cafe poetry scene in Austin, which happens at various venues most nights of the week, told me that Neil was one of the poets who supported and encouraged this endeavour. ‘He was always there,’ said Thom.

A man of many parts, in his time Neil has been a cowboy and a pilot, and more recently a town planning consultant. Often he also works with Dorsey when she presents workshops in a type of therapy called Voice Dialogue, which addresses the many selves we have within us. He has written poems based on Voice Dialogue. This link leads to some of these, and some by another poet, in a viewable or down-loadable pdf.

His poems are deceptively simple and straightforward. They say what they have to say, and then stop. It is when they linger in the mind long afterwards that you begin to realise their depth and delicacy. The wry understatement of Revenge of the Trees is typical too.

He publishes them in chapbooks via New Texas Press. Poems from some of the earlier volumes appear on his website and are still listed on Amazon, but he admits the website needs considerable updating and that he has not made arrangements to sell the more recent volumes online. Pity! I think he just gets better and better. Here’s a recent piece I love:

The leaves are dancing down the street

Leaves like the thousand children
that I never had with you

A skip, a dash, a lovely pirouette

then past, and gone