Nestled between
the drive-by
shootings and
L.A. murder trials,
60 seconds in Zaire...

On the road,
human tidal wave.
Millions in flight,
deserting the homeland.

A child by the roadside,
surrounded by ruins.
The women cover their
mouths and noses.
Side-long glances, in
motion.

On a hillside in Goma,
50,000 or more.
City in temporary
standstill.
Hours for water, bread,
death.

A food line in Kibumba,
children scrambling for
fallen grain.
Some wear bowls as hats,
dreaming of water.

On hard molten ground
the bodies are lain.
Covered in dirt, mass
graves.
No words are said as
the bulldozers come.

From Better to Travel: Selected Poems 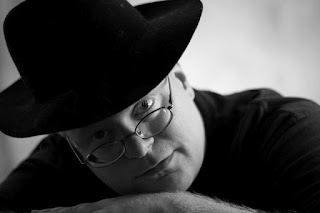 I met Atlanta poet Collin Kelley in Austin, Texas in 2006, when we were both featured readers at the Austin International Poetry Festival. We met on the first day, sat at the same table during the opening ceremony, and waved to each other in passing the rest of the time. There were so many venues, so much poetry happening all over town, that I never got to hear him read. But those friendly waves made me feel welcomed. We exchanged email addresses and kept in touch. When I wanted to start a blog, I asked his advice on various points, as he already had a thriving blog. I was clueless, and he was most kind about giving me tips and techniques. Since then I have acquired all his books so far; have finally heard him read, on YouTube; and have become his friend on facebook and follower on twitter.

Collin is a journalist, editor, playwright and fiction writer as well as a poet, so when I say I have all his books, I mean novels and short stories as well as poetry. I think he's brilliant in all genres. He is also a generous promoter of other poets and has interviewed several online. For four years he used to do the same on radio.

The best place to learn more about Collin is in his blog, Modern Confessional, and the attached 'About Collin' page which gives details of his distinguished literary career. It also lists his publications and places to find some of his poems.

I could have chosen any of his poems; I enjoy and admire them all. I opted for this one because I think poetry with political themes is very hard to write successfully without descending into a rant —or so I find. Some things are so dramatic in themselves that they need no embellishment, only excellent description. His restraint is powerful. And then there's the biting irony in that throwaway last line!

Email ThisBlogThis!Share to TwitterShare to FacebookShare to Pinterest
Labels: Collin Kelley, I Wish I'd Written This