Thanks to all of you, who responded and played with our new theme, last week!  I loved the  memories that surfaced, while reading your poems! :D

This week we are going to tread into history, while enjoying  tea, a Geisha and maybe a ghost.  You can go in any direction with these photos.  Just look at the photos and see where it takes you.  This week's wonder, I mean prompt is odd n' unique. I'm naming it weird. Don't worry I will run out of W's eventually and we will use other letters.

This tea set was given to me by my Mother-in-law.   She gave me 6 tea cups and plates. The set was incomplete, no tea pot.   She received it from a great aunt and it did not go with her other tea sets.  She asked me if I would like it.  I said,  "Yes and thank you for thinking of me."

She knew I loved tea and the art palette would also appeal to me.  She told me what she knew about the set.  It was Japanese and there was a raised image of a Geisha in the bottom of the cup.  The first time I drank out of the cup.  It surprised and spooked me.  It was strange seeing an image of a woman looking back at me. Here are some photos I took.

I was in the process of moving, when she gave this set to me.  When I arrived in my new home, in North Carolina and was settled, I opened the set.  I washed it and decided to have a cup of tea.  When I saw the face, I knew I had to take photos.  Seeing the geisha was like seeing a ghost.   I got online to  find out about this unique tea setting and its history. 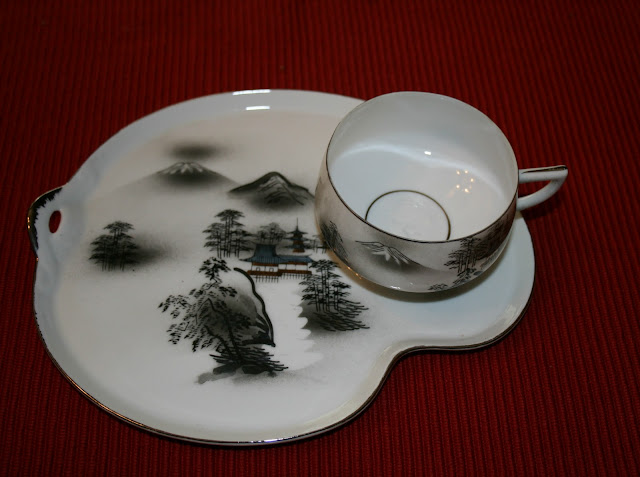 This is the tea set.  A serving for one. 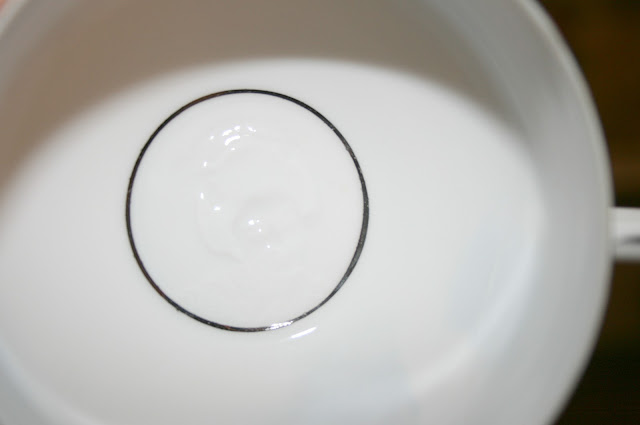 In this photo you can see a raised image in the bottom of the tea cup.  Do you see the outline of a Geisha?! 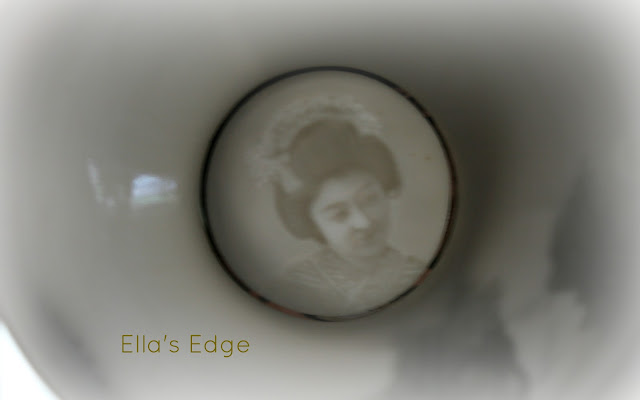 Here is the cup being tilted up. YOU can now see the Geisha! 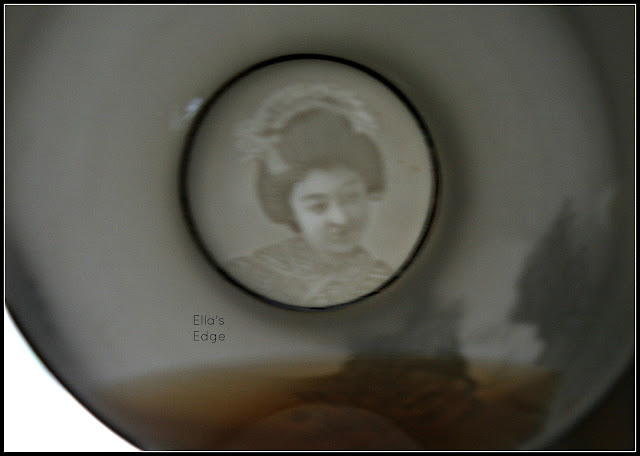 Here I have darkened the image.  In this photo I am having a cup of tea!

The tea cups are made of fine Bone China. The service is from the 1950's, it is called Hayasi Kutani.  You can also look it up by referencing Geisha Ghost.  The molded art is made, by very thin translucent porcelain also known as Lithophane.  This process can create a 3-D image.  YOU can see the image when light n' shadows are in play, when you tilt your cup of tea.   You can also set the cup in a sunny window and view it at different times during the day.  Sunlight alters the image and the Geisha Ghost will appear.

It is believed this process was first developed in China.  In the 1930's, the Japanese started producing Lithophane on sake 'n tea cups.   During WWII many sailors and soldiers were buying pieces to bring back home, during 1945-1952.  This art form stopped production sometime in the 1950's.


Isn't it amazing!!!
YOU have your prompt, to me it is more wonderful than weird!  Pour a cup of tea and let the image
speak to you!   I look forward to your poems~  Off to make a cup of my favorite, Oolong!