I have always aspired to a more spacious form
that would be free from the claims of poetry or prose
and would let us understand each other without exposing
the author or reader to sublime agonies.

In the very essence of poetry there is something indecent:
a thing is brought forth which we didn't know we had in us,
so we blink our eyes, as if a tiger had sprung out
and stood in the light, lashing his tail.

That's why poetry is rightly said to be dictated by a daimonion,
though it's an exaggeration to maintain that he must be an angel.
It's hard to guess where that pride of poets comes from,
when so often they're put to shame by the disclosure of their frailty.

What reasonable man would like to be a city of demons,
who behave as if they were at home, speak in many tongues,
and who, not satisfied with stealing his lips or hand,
work at changing his destiny for their convenience?

It's true that what is morbid is highly valued today,
and so you may think that I am only joking
or that I've devised just one more means
of praising Art with the help of irony.

There was a time when only wise books were read,
helping us to bear our pain and misery.
This, after all, is not quite the same
as leafing through a thousand works fresh from psychiatric clinics.

And yet the world is different from what it seems to be
and we are other than how we see ourselves in our ravings.
People therefore preserve silent integrity,
thus earning the respect of their relatives and neighbors.

The purpose of poetry is to remind us
how difficult it is to remain just one person,
for our house is open, there are no keys in the doors,
and invisible guests come in and out at will.

What I'm saying here is not, I agree, poetry,
as poems should be written rarely and reluctantly,
under unbearable duress and only with the hope
that good spirits, not evil ones, choose us for their instrument. 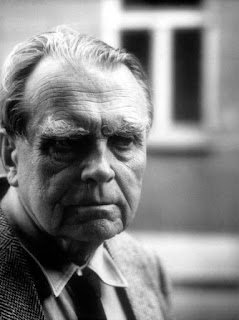 Czeslaw Milosz was born and grew up in Lithuania, lived many years in Poland, migrated to the United States in 1960 and became a US citizen in 1970. At the end of his life, he was able to spend time in Poland again, going back and forth from America. A prolific writer (as you can see in his Wikipedia entry if you scroll down to the end, to the list of his writings) he won the Nobel Prize for Literature in 1980, when it was said of him: "who with uncompromising clear-sightedness voices man's exposed condition in a world of severe conflicts".

I hope it's self-evident why I could wish to have written this. The last three lines alone would be reason enough. Also I like the quirky tone, almost casual despite the wonderful language and imagery; and the way he begins by taking an anti-poetic position which leads us right around to its exact opposite.

You can find lots more of his poems at that ever-useful site PoemHunter.com, and at Poets.org you can have the pleasure of hearing him read some of his own work, including the poem I've chosen for you. It's very interesting to listen to that one, as he uses a translation slightly different from the accepted version you see here. Perhaps it is his own translation.

There is a long list of his books, both poetry and prose, on Amazon.

Email ThisBlogThis!Share to TwitterShare to FacebookShare to Pinterest
Labels: Ars Poetica?, Czeslaw Milosz, I Wish I'd Written This