In the seat that we shared in the second grade
there was always a space between us
left for our guardian angels.
We had made it out of the brownies together
because you knew your numbers
and could find the right pages
while I could read all the words.
You were absent a lot between Halloween
and Thanksgiving
and just before Christmas vacation
you disappeared
along with the tinsel
and paper turkeys
and never returned.

My guardian angel and I had the seat to ourselves
for a little while only
until I was demoted back to the brownies
because I could never find the correct page.

You were not my first death
but your going was not solaced by the usual
rituals of separation
the dark lugubrious murmurs
and invitations by threat
to the dignified grownups' view
of a child's inelegant pain
so even now
all these years of death later
I search through the index
of each new book
on magic
hoping to find some new spelling
of your name.

(from The Black Unicorn) 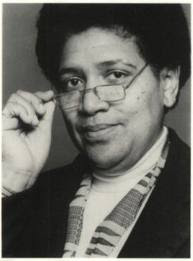 It must have been about 1987 when I admired Audre Lorde from afar at a women writers' conference in Melbourne, Australia, where she was one of the visiting stars. I remember her as a warm, handsome, rich-voiced woman, very much like this photograph which is obviously from the same era of her life. And the poetry was awesome in its directness and uncompromising power. It was a shock to me, as I gathered material for this article, to discover she died in 1992. (It was the year I was separating from my second husband, going bankrupt, and moving house. And it was before the internet. Even so, I'm surprised I missed that news.)

I like this particular poem for its evocation of the world of childhood, in an unsentimental but very real way which made me feel I was one of those children in that classroom. She's absolutely 'got' the way children mix magickal and mundane thinking as parts of the same reality.

In my writers' group today we were talking about adjectives. Is it really necessary to leave them all out in order to write well? We came to the conclusion that some are necessary, but not piling them on makes the ones you do use more effective. I can't help noticing Lorde's striking use of adjectives here — all four of them: 'dark lugubrious murmurs', 'dignified grownups', 'inelegant pain'.

As a black, lesbian, feminist poet, Lorde considered herself an outsider on all counts. Yet her poetry seems to me to speak to our common humanity, even when she is chronicling women of very different cultures.

She was a prolific writer who also produced essays and memoir.  You can get her books from Amazon here, and her Collected Poems here.

There are more of her poems at the very useful Poem Hunter website.

You can hear readings of her work on Youtube (by other people, but done well) and you can read her views here on poetry not being a luxury.

Email ThisBlogThis!Share to TwitterShare to FacebookShare to Pinterest
Labels: Audre Lorde, I Wish I'd Written This