BLOG OF THE WEEK ~ AN UPDATE WITH DE JACKSON

This week, we are making a return visit to     to the talented and vivacious De Jackson, who writes at Whimsygizmo's Blog. De lives in Henderson, Nevada, which is just outside Las Vegas. We last spoke with her in an interview in 2012, so I thought it might be time to make a trip to the hot and dusty desert, to see how she is faring these days. From the sound of things, everything is going wonderfully in Henderson! 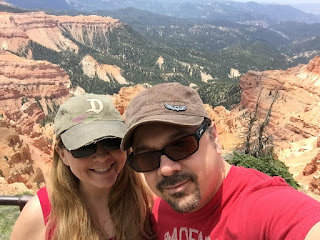 Me and my hubby in Utah last June

Sherry: De, bring us up to date with your life since our interview in 2012. Still living happily in the desert in Nevada? How are your wonderful husband and children doing? And how is the adorable Kiera-Kai?

De: Goodness! Has it been 3 years already? Time doesn’t just fly; it falls. Let’s see…I was honored as a Poet Laureate for Writer’s Digest’s Poetic Asides (with Robert Lee Brewer) in December of 2012 – that was a huge highlight for me (the news came on the eve of my birthday!)

I’m still desert-bound in Southern Nevada, but happy to be surrounded by the people I love most in the world. My hubby’s good. We’re both writers, so there’s a lot of good old introverted silence around here, and some great word conversations. Both kids are in junior high now, so we’re navigating those lovely teen-and-tween years. And math classes waaaaaay beyond my scope of understanding. 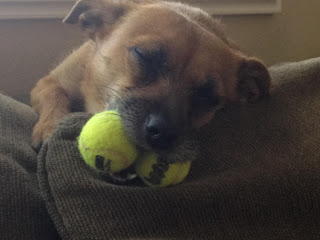 Kiera-Kai. It always has to be two balls,
never just one. She's a crackup.

Kiera-Kai is still our furry baby – just enough terrier to be psycho; just enough chihuahua to be neurotic. She’s hilarious. And she’s been joined by a very large feline brother, Phantom Samurai, and a bearded dragon named Flint. Add in my son’s tarantula, and a dozen or so varied species of insects and arachnids, and the Jackson menagerie is (hopefully!) complete. 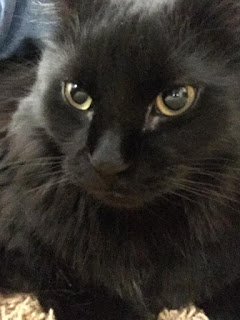 I do still pick up the occasional copywriting job. I don’t solicit them much any more, but when an old client comes calling, I usually accept the gig. I’m mostly focused on poetry these days.

Sherry: I know you love the ocean, especially Cannon Beach on the Oregon coast, where you were hoping to return for your anniversary. I recall your telling me “I breathe best near water.” Have you been back there since 2012? Still making your annual migration to Lake Tahoe? 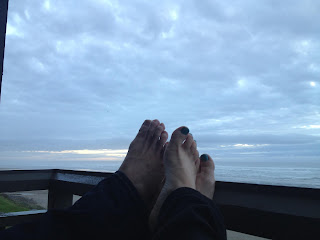 Cannon Beach, Oregon, 2014
This photo makes my heart ache.
I want to be there.

De: Yes! I’m happy to say that last year, finally, for our 16th anniversary, we spent an incredible 5 days there. And as a family, we spent a full month away this summer – Tahoe, with a Carmel (-by-the-Sea) center. We have family in Tahoe, and we get to go back for a wedding in October, and then again for Thanksgiving. It truly is my Happy Place. 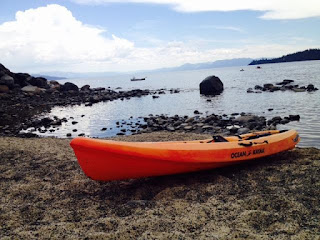 My Happy Place.
The north shore of Lake Tahoe.

Sherry: It all sounds glorious, De. And I know what you mean about your heart aching for the ocean. Mine does, too.

In our interview, you told us you have been writing since you could first hold a pencil. In 2012, you mentioned hoping to put together a chapbook, and also to do some writing for children. How are those projects going, my friend?

De: Hmmmm. Guess I better get on that, huh? Have I mentioned that I’m much better at “hoping to” than actually doing? I’ve written hundreds of poems since then (it all averages out to about one a day, and last May I even did 18 hours of a 24-hour poem-an-hour challenge).

Sherry: WOW! That sounds highly ambitious! Good for you! I don't know that I could stay awake  that long, never mind write eighteen poems!

De: I’ve had a small smattering of success in various publications, both online and print. I’ve also entered a couple of chapbooks into challenges. I haven’t blown any of the dust off of my children’s book manuscripts. I haven’t figured out how to wrangle any poems into a book for publishing, self or otherwise. But I’m writing. And writing and writing and writing. It’s two different sides of my brain, really. And only the “write” side works, right now. I’m goin’ with it. 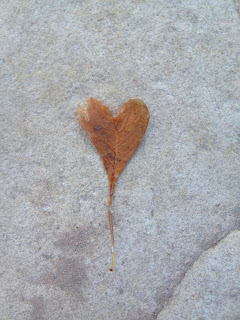 Nature is my favorite inspiration. God leaves me Valentines
all year long.

Sherry: That sounds perfect, kiddo. Recently, I really enjoyed your poem “This Poem Got Up On the Wrong Side of the Bed” and would love to include it here. Tell us a bit about how it came to be?

De: Sometimes when I get stuck, I simply type the words “This Poem Is…” and then freewrite.  For this poem, we were asked to write about poetry itself, and I was having a particularly “stuck” sort of week. Thus, this:

this poem got up on the wrong side of the bed


this poem
is a lost soul, waiting
to be chased; a loose tongue
that can not erase
the things it’s said.

this poem wanted to be in
-digo, until i stained it
slightly unblushed pink.
i think it’s mad, but
it’s hard to tell.

this poem is a spell
without a witch, which
ticks it off so much it just
might twitch its own damn
nose and make you
all dis
-appear.
this poem is a smear, a
smudge, a too-small aching
nudge toward something
greater than all this
stupid
skin.

this poem knows
how to begin, but never
where to end.
it’s a fair-weathered un
-feathered friend, a hopeghost
bird with only a small strain
of song.

this poem is empty,
full
of longing,
loss
and lies.

to love the poem,
you must release it, crease
it in two. hope
it flies.

Sherry: I absolutely adore this poem-come-to-life. Especially it making all of us disappear.

De: If you like this idea, Hannah Gosselin takes it even one step further with a cool form that inspires. You can check it out here.

Sherry: I adore Hannah's Boomerang Form! Are there a couple of other poems you would like to include here? and tell us something about each one? 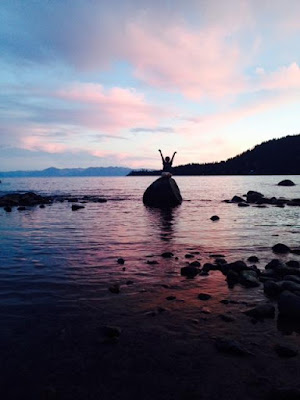 My daughter is a poem!


De: Since I’m a desert-bound soul who longs for sea, and there’s that “grass is always greener” thing, I assume perhaps mermaids feel the same way about land:


If you crave legs,
girls, just crawl aboard
this verdant shore.

A roof made of more
than salt and wave?
Come, be saved by
copper, and balsa
and sunlight. Feel
the blades between
your hungry toes
and know that
this world is made
of more than shim
-mer, sway.

Stay as long as you like
but when you go, take
a piece with you
back to sea and leave
(weave)
something in its
wake:
a sapphire scale, a trinket,
a finely finned tear.

Every storm steals some
-thing, leaves something
else behind. 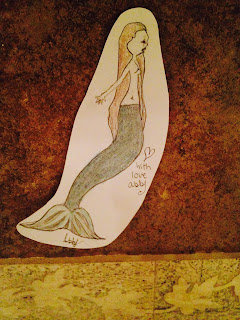 Mermaid drawing by my daughter Abby


Sherry: How I love "this world is made of something more than shimmer, sway." And your daughter is a talented artist already.

De: This one was written for Poetic Asides during the May Poem-a-Day Challenge. (I’m one of those twisted souls who loves fractured fairy tales.)

cutting off your hair (and other unconventional
uses for a sword)


nobody knows she feels small
in the wee hours of the morning,
watching the moon fade
in this world of magic mirrors and
tower cages and identities tied
to golden tresses
long
enough
to
climb.

nobody asked her if she wants
to marry a prince or be a gleeful
pauper or feel the dirt between
her unslippered toes.

nobody knows she dreams
of dragons, armor,
distant shores and un
-furled sails, a place where
nobody endlessly calls
her name.

nobody’s seen her
since tuesday.

Sherry: I love fractured fairy tales the best! I love the realness of the princess nobody knows.

Tryin’ to throw her arms around the world


Anyone can slay a dragon, he told me, but try waking up every morning and loving the world all over again. That’s what takes a real hero.
- Brian Andreas
Teach it to sing
in perfect harm
-ony; teach it to dance
like no one’s watching.

Tell it a story,
some sign of hope.
Carve your name somewhere
on its surface, I was here.Buy it a Coke, then use it
to burn all the crap off
of a dirty penny, so you
can once again feel
the raised words
In God We Trust.
Thrust it further out
into the atmosphere,
test gravity and rocket
science and quantum
something or other
until the equation
adds itself back up
to the sun.

Teach it the significance
of scars below
or stars above, but
above all else, just
teach it to love.

Sherry: Oh, this is one of my favorites of yours, kiddo. I adore the quote that it sprang from....and "Teach it to love." What a wonderful vision this is.

What other interests do you pursue when you aren’t writing? (And driving kids around to their various activities? I know they are at busy ages right now.)

De: I’m a voracious reader, when I remember that I am, and make time for it. I swallowed several authors whole this past winter and spring.

I'm blessed to be part of the gorgeous publication The Phoenix Soul each month, among some incredible artists and writers.

As a family, we love to hike and explore, and we travel as often as we can. We volunteer at an animal sanctuary about an hour from us, and we’re all involved at our church. I’m a big fan of gettin’ outta dodge with my hot hubby. We play a ton of Scrabble. Add in the whole parenting-of-teen-and-tween thing, and there’s little time for anything else. 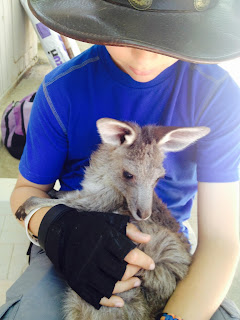 The boy in his element: fur, scales, antenna

Sherry: It sounds busy and wonderful. Bless you for your work with rescued animals, and with the Church. De, you have been a loyal member of Poets United for several years now. Thank you so much for sticking with us. Is there anything  you’d  like to say to our members? 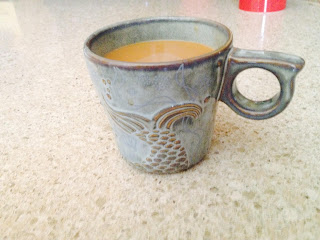 De: First, THANK YOU. Those of you who take the time to read and comment really do make a difference. Writing can be such a lonely craft, even for us introverts. And please, keep writing. I’m so inspired by all of you. Some of the most amazing up-and-coming poetic talent in the world is right here, in you guys. I’m so thankful to be part of it.

Sherry: I agree, there is a lot of talent among our members, including you. We are so happy you are here! Keep cranking out those wonderful poems, and we'll keep reading! And thanks so much for bringing us up to date with your busy life.

Well, kids? Wasn't this a lovely visit? Do come back and see who we talk to next. Who knows? It might be you!

Email ThisBlogThis!Share to TwitterShare to FacebookShare to Pinterest
Labels: De Jackson, Past Poetry Blogs of the Week