There's a place called Far-away Meadow
We never shall mow in again,
Or such is the talk at the farmhouse:
The meadow is finished with men.
Then now is the chance for the flowers
That can't stand mowers and plowers.
It must be now, through, in season
Before the not mowing brings trees on,
Before trees, seeing the opening,
March into a shadowy claim.
The trees are all I'm afraid of,
That flowers can't bloom in the shade of;
It's no more men I'm afraid of;
The meadow is done with the tame.
The place for the moment is ours
For you, oh tumultuous flowers,
To go to waste and go wild in,
All shapes and colors of flowers,
I needn't call you by name. 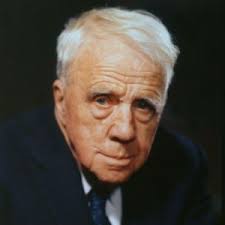 It occurred to me that I hadn't yet featured Robert Frost, considered one of the greatest – if not THE greatest – of American poets. I didn't want to use the ones that are most well-known, so had a hunt and found this one which was new to me. I hope it may be new to some of you as well.

I like it because of the way the speaker so exults over the wildflowers he anticipates in the discarded meadow. There is an exuberance, both about the imagined flowers and in the speaker's voice. It's rather a nice follow-on from Angie Walker's celebration of flowers in 'I Wish I'd Written This' last week.

There is a long article on his poetics at The Poetry Foundation, detailing his interesting position as neither strictly a traditionalist nor yet a modern free-versifier. Rather, he worked to make metrical verse convey current rhythms of spoken language – particularly that of the New England he inhabited.

Wikipedia has a briefer account of his life and work, including such highlights as his four Pulitzer Prizes, his teaching and farming careers, and the fact that he was chosen to deliver a poem at President Kennedy's Inauguration.

I am going to have to leave you to research these further yourself, as I am having internet problems due to wild weather, and need to schedule this post while I can. I imagine many of you do already know a lot about Frost, and perhaps learned about him in school.