Wherever her main residence is now,
Asma unpacks her pretty clothes.
It takes forever: so much silk and cashmere
To be unpeeled from clinging leaves of tissue
By her ladies. With her perfect hands, she helps.

Out there in Syria, the torturers
Arrive by bus at every change of shift
While victims dangle from their cracking wrists.
Beaten with iron bars, young people pray
To die soon. This is the middle ages
Brought back to living death. Her husband’s doing.
The screams will never reach her where she is.

Asma’s uncovered hair had promised progress
For all her nation’s women. They believed her.
We who looked on believed the promise too.
But now, as she unpacks her pretty clothes,
The dream at home dissolves in agony.

Bashar, her husband, does as he sees fit
To cripple every enemy with pain.
We sort of knew, but he had seemed so modern
With Asma alongside him. His big talk
About destroying Israel: standard stuff.
A culture-changing wife offset all that.

She did, she did. I doted as Vogue did
On her sheer style. Dear God, it fooled me too,
So now my blood is curdled by the shrieks
Of people mad with grief. My own wrists hurt

As Asma, with her lustrous fingertips –
She must have thought such things could never happen –
Unpacks her pretty clothes. 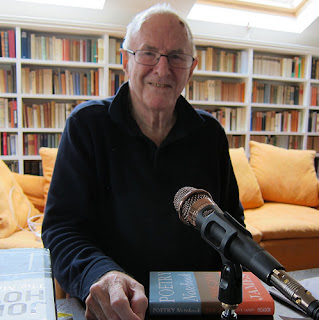 Expatriate Australian Clive James has lived in England since 1962, with occasional visits home. I heard him speak in the Writers' Week segment of the Perth Arts Festival in 2003. He was urbane, witty, pleasant, and quite lacking in self-importance despite his celebrated erudition.

He is sometimes described as a Renaissance man. As Wikipedia tells us, he is 'author, critic, broadcaster, poet, translator and memoirist, best known for his autobiographical series Unreliable Memoirs, for his chat shows and documentaries on British television and for his prolific journalism.'

You can find out a lot more detail about him in that article, and if you Google his name you'll find many other articles about him as well as speeches and pieces of journalism by him, and interviews in which he is the subject. He has been a prolific writer; his Amazon page runs into several pages.

His latest and probably last poetry book, Sentenced to Life, which this poem is from, is written in the consciousness of his impending death. He has been diagnosed with terminal leukemia as well as kidney failure and emphysema. Many of the poems raise issues about life and death – in general, and his own in particular.

This poem, though, is not about himself but the wife of the Syrian President Bashar al-Assad: Asma, who was born, raised and educated in England. It is also, of course, a poem about death – many deaths. It reflects the horror and disillusionment most Westerners felt about Asma a few years ago, when her husband started looking like a dictator rather than the reformer he at first appeared to be. Since that time Asma, who had had a well-publicised reformist agenda herself, working with women's groups for instance, and encouraging education, has stood by her husband and spoken publicly in support of him.

Well, Middle East politics are complex; also it is impossible to know if she is coerced into saying these things or really believes them. At the time James wrote the poem, and even now, there is little doubt that her husband is indeed a brutal dictator and she does indeed justify him.

I chose the poem because I think it's an excellent example of a political poem. I like that it's not a rant but makes its points rationally, almost satirically. He shows us the dreadful everydayness of the evils he describes, with the torturers arriving by bus for their shifts.

Asma was initially lauded in an article by Vogue (which later withdrew it from publication in the light of her current stance, which it declared at variance with Vogue's  principles). So we do know that she has lots of pretty and expensive clothes, the device James uses to show her distance from the lives of ordinary citizens.

Understatement can make an even more powerful poem than expressions of rage. I would almost say this is a poem of understatement – except that the second verse describes torture so unequivocally. But it is also described baldly. No need to apply extreme adjectives; the bare facts are quite frightful enough. James doesn't shirk them.

It's not a nice poem. It's not reassuring, comforting or hopeful. But, at a time when many of us are in despair about politics, perhaps it shows us an effective way to use our poetry.

James often, it seems to me, writes primarily from his brain. But I look again, and see that his heart is also very definitely engaged. Consequently he can engage the hearts and brains of his readers too. 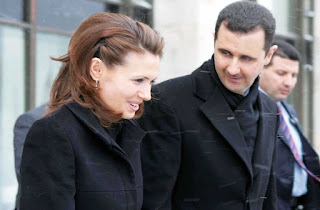 Email ThisBlogThis!Share to TwitterShare to FacebookShare to Pinterest
Labels: Clive James, I Wish I'd Written This