Blog of the Week ~ Bjorn Rudberg and the Aged Librarian


I am sure you have all come across Bjorn Rudberg's series of poems about the Aged Librarian, which he has been writing all winter at Bjorn Rudberg's Writings. This is a series that has interested me very much, and I thought you might like to hear more about it as well. Pour yourself a nice cup of afternoon tea and draw your chairs in close. Let's find out about this intriguing character, and the poet who created him! 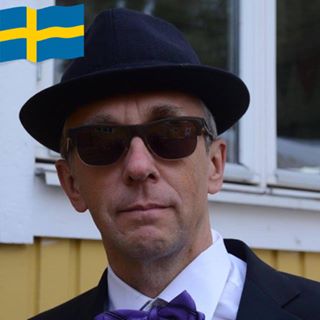 Sherry: Bjorn, I have been so intrigued by the series you have been writing about the aged librarian.  How and why did he appear, the first time? Tell us about him.

Bjorn: My very first idea of the aged librarian came from a prompt about Jorge Louis Borges. One of his more famous short stories called “The Library of Babel” has always been close to my heart. I don’t think it was so much the library itself but the sense of a librarian that fascinated me. The idea or a concept of an ancient scholar is a great attraction to me. I think many people reading about him recognize themselves in him.

The aged librarian collects ideals:
he’s saving fragments, bulbs and seeds
of scribbled shorthand, notes and antidotes.
He shuffles words and stanzas
tries to set them juxtaposed against his memory of youth:
the boisterous marketplace before he closed the doors;
the recollections of the lips he never dared to kiss,
her breasts, her hair and music that he failed to play.


He’s lacking soil and sun of conversations,
Stiff from loneliness and books his life is hushed,
it’s slow and collected possibilities have withered in a corner.
Ideas gather dust and resolutions rust
as the aged librarian is waiting for a crust of metaphors
to grow, connect his dreams.
The aged librarian closes his eyes, sighs.
December 22, 2016

Sherry: I can see him, and he looks a bit like my dream man. Smiles.

Bjorn: Thank you. I think he lacks some social skills in dealing with women. An influence for me is Stoner from the great book with the same name by John Williams about a man who is lost to the world, but still survives with his words. There is something tender and vulnerable with him, yet something very strong. I often draw inspiration from opposites in my poetry, and I think I have poured a little bit of that into the character. 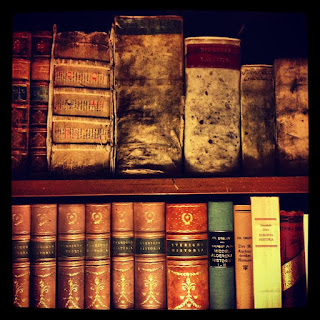 His finger traces spines; blind
he reads the gilded letters
embossed as braille
he’s forming stanzas in his mind.
Heart of darkness, beating.
Wanting.
Craving fleur de mal.
But the aged librarian can only dream in sepia
of nyloned legs
her heels, mischievous curls she’d kept hidden;
the way she used to eyelash him;
loins were longing.


his lips are parchment (dry from poetry)
forever reaching
back in time to the moment she moved out and left him pressed
between the pages
as a bookmark (one of many) in her books unread
January 5, 2017

Sherry: A lonely librarian, pressed between the pages of a book. How poignant!


Bjorn: I always think of the librarian becoming indistinguishable from the books. I think he represents our collective memories, so I also wanted to use him as a character talking about the end of times. Some of the scenes are apocalyptic, and I think the library can be the last refuge of humanity. That's why I refer to Plato and Atlantis in a few of my poems. He only sees the shadows on the wall through his books, but yet I think he sees much more than most of us. I want to capture him as a metaphor about everything we are about to lose.

Sherry: I love that description, and insight. It is hard to see the writing on the wall of these times we live in. I love the idea of the library (books) as the last refuge. Certainly, books have always been mine. 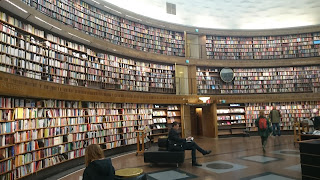 HE CAN ONLY SPEAK IN POETRY

He always thought that
bridges
could be built as essays (unabridged).
That if he listened — after-
wards he’d be allowed to speak his mind.
“It’s like crossing ridges —
once you reach the highest point it’s downhill
to the valley below”
But timeslots slips; the aged librarian
waits,
and builds his thesis,
breath by breath,
strong with reason — walled with words
and punctuated,
it’s perfected
juxtaposed to synthesis;
“My mouth is filled with pebbles”.
He believes that chasms of treason
can be closed
if just once
he’d be allowed to speak his mind.


He lights a candle. Sighs.
Cause bridges crumble and his pens run dry.
That’s why
the aged librarian just makes sense in
poetry.
January 10, 2017

Sherry: This has been a wonderful unfolding, with great development of character. Once he was here, what kept him coming back?

Bjorn: Already from my first poem I felt that he can be my spokesperson. Not an alter ego, but maybe a persona that is only part of me. He has begun to appear in my thoughts, and whenever I feel lost for inspiration I think… what my aged librarian wants to say. He has become a voice that whispers words of sorrow, and a bit of hope.

Sherry: That’s pretty cool, Bjorn, "a voice that whispers words of sorrow, and a bit of hope”. We can all use an inner voice like that. Or maybe we all have aged librarians inside us. What are you seeking to express in this series of poems?

Bjorn: I think I want to say many things, but to a large extent he is a metaphor for everything that we are losing. He stands up against stupidity (though he has his own stupidity). I feel that libraries are changing, that the written word has lost its ground. This is why he is often alone, by himself in his large library. I think he has lost a lot of things in his life, but he has gained some things as well. 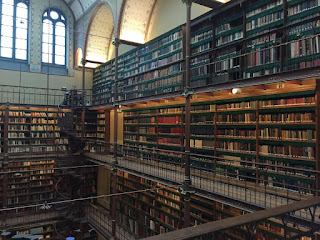 Library in the Rijks Museum of Amsterdam

On new year’s eve he lets the ancient sunshine in
to dust beloved shelves.
He sits beside the window drinking tea
and watches specks of dust transform from books to stars.
He notices their subtle scintillation
before they fall to rest.
Seemingly so random
dust becomes
(in Brownian movements)
the harbinger of matter,
a silent voice of molecules, an echo of what’s real.
The aged librarian (used to reading shadows)
finds how close to Plato’s cave this daylight really is.
‘It’s like my youth’, he mumbles,
‘I harvest now in aftermath of thoughts,
the random movement
that I once attributed to hormones’.


The aged librarian sighs:
‘I think that Plato knew that only
when you’ve aged with books,
you know how little you have seen
and tomorrow yet another year has passed.’
And in the setting sun the aged librarian
waits; his tea is growing cold.
December 31, 2016

Sherry: You identify with him in some ways, it is clear.

Bjorn: As I said, I think there are things I identify with, but many other things are just the opposite of me. While he is shy and silent, I am loud and boisterous. He would probably like me way less that I would like him. Part of him is an ideal, part of him is a fear of what I once could be. 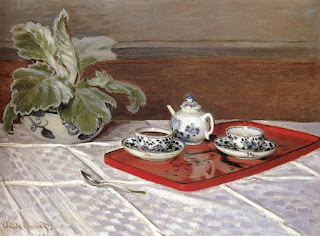 The tea set by Claude Monet

“Is the library like woods or sea?
Do books resemble trees or waves?”
Maybe they are both, the aged librarian ponders
as he stirs his Oolong tea
while sifting through his childhood memories.
He recalls his mother’s hand in his,
still warm with spring
she taught him trees,
how boughs had voice,
how leaves were syllables
each tree a changing poesy,
each path a syllabus to follow.
The library is woods.
He feels his father’s hand in his,
callous, salt with brine
he taught him of the sails and waves,
how sea is meter, wind the strings
of songs; each wave another iamb.
He taught him
how the stanzas can be storms or doldrums,
how a lighthouse is another path to shore;
another syllabus.
Hence library is sea.


He sips his Oolong tea; he smiles;
his world is woods and sea;
his words are waves and trees;
his home the library, as he was taught.

Sherry: Sigh. I love this poem the best of all. You have developed this character so well, I feel I know him. To wrap up,  I would love to include "Books and Gardens" here, just because it is beautiful and fits so well with the librarian. Let's read:

My garden is a library, my books are flowerbeds.
When leafing through my books I find how flowers
in my garden are like poems. A few are buds,
in splash of color, shy, still sparked from hope;
they need my care and warmth of voice before
they bloom. But books are also thistles, thorned
unwanted, proud and wonderful in purpleness.
My garden bulbs are words, my garden is a place
for poesy and posies, for sense and sentences
and even in the winter I can hear a voice of violas.
Words can be like fir-trees, stern but comfort givers,
my shelter when the winds have teeth and claws,
My garden has a hermit’s cave with walls of books
and there I am alone librarian: I am gardener of
willows; I am the caretaker of growth and spelling.


If you have a garden and a library, you have everything you need.
Marcus Tullius Cicero
November 15, 2016

Sherry: This is lovely, Bjorn. I completely agree with Cicero: with a garden and a library, we have all we need. I have been rich in both this lifetime.

In closing, would you like to tell us your plans for this series? Do you foresee a book?

Bjorn: One of the reasons I keep writing about my aged librarian is that I had a vague idea of making him a character in a poetry book. I would really love to do a book that is not a chap book, but a poetry book that you can read from start to finish.  I would probably add information between the poems, and poems yet unwritten. At some point I will write about the library itself as well. But I am open to any ideas on how such a book would be.

Sherry: Your outline sounds absolutely wonderful to me. I am a big proponent of self-publishing our own books, as it is easy and affordable. But your series sounds so original and intriguing, I think a publisher would be very interested. We'll watch with interest for the book to appear. We can launch it here!

Thank you, Bjorn, for telling us more about your aged librarian. Since we have been enjoying this series so much, it is nice to get a more in-depth look at him. I have developed a little crush on him. LOL.

Wasn't this interesting, my friends? I look forward to reading more about this appealing character. Do come back and see who we talk to next. Who knows? It might be you!

Email ThisBlogThis!Share to TwitterShare to FacebookShare to Pinterest
Labels: Bjorn Rudberg, Past Poetry Blogs of the Week