Bent double, like old beggars under sacks,
Knock-kneed, coughing like hags, we cursed through sludge,
Till on the haunting flares we turned our backs,
And towards our distant rest began to trudge.
Men marched asleep. Many had lost their boots,
But limped on, blood-shod. All went lame; all blind;
Drunk with fatigue; deaf even to the hoots
Of gas-shells dropping softly behind.

Gas! GAS! Quick, boys!—An ecstasy of fumbling
Fitting the clumsy helmets just in time,
But someone still was yelling out and stumbling
And flound’ring like a man in fire or lime.—
Dim through the misty panes and thick green light,
As under a green sea, I saw him drowning.

In all my dreams before my helpless sight,
He plunges at me, guttering, choking, drowning.

If in some smothering dreams, you too could pace
Behind the wagon that we flung him in,
And watch the white eyes writhing in his face,
His hanging face, like a devil’s sick of sin;
If you could hear, at every jolt, the blood
Come gargling from the froth-corrupted lungs,
Obscene as cancer, bitter as the cud
Of vile, incurable sores on innocent tongues,—
My friend, you would not tell with such high zest
To children ardent for some desperate glory,
The old Lie: Dulce et decorum est
Pro patria mori.

(The Latin means, 'It is sweet and honourable to die for one's country'.) 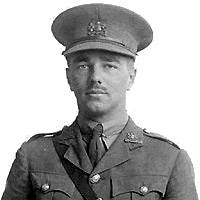 It's just been Anzac Day here in Australia (and in New Zealand too). So at present I am particularly conscious of war and its aftermath. The Anzac Day tradition began as a commemoration of particular events in World War I. Wilfred Owen – who was not Australian but English – served in World War I and was killed shortly before it ended, at the age of 25.

It's generally agreed that, as Poetry Foundation observes, he 'wrote some of the best British poetry on World War I.' The article goes on to say that Owen

composed nearly all of his poems in slightly over a year, from August 1917 to September 1918. In November 1918 he was killed in action at the age of twenty-five, one week before the Armistice. Only five poems were published in his lifetime—three in the Nation and two that appeared anonymously in the Hydra, a journal he edited in 1917 when he was a patient at Craiglockhart War Hospital in Edinburgh.

Almost all his poems appeared posthumously, with the good graces of other poets: in particular his friend and sometime mentor Siegfried Sassoon, Edith Sitwell, Edmund Blunden and C. Day Lewis.

Owen's experiences at the front made him anti-war, and a purposefully anti-war poet. He and Sassoon were both notable for writing realistic war poetry rather than patriotic pieces about honour and glory, as other war poets were doing at the time. In fact they wanted the war stopped, on the grounds that the only thing it could achieve was further suffering.

Today, opinion is not so polarised. Most of us don't think there's much glory in war, but with the hindsight of history we perceive some wars as having been unfortunately necessary. At least we haven't yet worked out what else to do when diplomacy and/or economic sanctions fail.

Yesterday I watched a TV program in which a group of disabled veterans (both physically and mentally damaged from  their years of active service) answered anonymous questions – the sorts of things people are curious about but don't usually ask because it would be rude. They were very straightforward and honest in their answers. It emerged that, whatever their reasons for joining the military, all included the intention to help other people.

But when they were asked whether they thought war did any good, at first each of them said a regretful no. Then some admitted that in small ways they thought they had done some good in the particular time and place – but not long-term. In our era, the enemy is not in the opposite trenches; it is much more difficult to fight terrorists. And the veterans see, with regard to the very long engagements in places like Afghanistan, the gains they once helped make being eroded and reversed over time.

Though we haven't found the answer yet, it's good that we no longer glorify war, and important that it's never entered into lightly, or as anything but a last resort. Poems like this one of Wilfred Owen's have played their part in waking us up. (Today the TV news does a good job of it, too. We can't remain ignorant.)

That wasn't Owen's only importance as a poet, though. He was also technically innovative for his time (in ways that he himself doesn't seem to have appreciated fully, though his peers did) e.g in his use of slant rhyme. We, who do all sorts of things that once would not have been considered poetry, probably owe him a debt (along with others whose experiments we're more aware of). I'll quote Poetry Foundation again (same link) for more detail:

Sassoon called “Strange Meeting” Owen’s masterpiece, the finest elegy by a soldier who fought in World War I. T.S. Eliot, who praised it as “one of the most moving pieces of verse inspired by the war,” recognized that its emotional power lies in Owen’s “technical achievement of great originality.” In “Strange Meeting,” Owen sustains the dreamlike quality by a complex musical pattern, which unifies the poem and leads to an overwhelming sense of war’s waste and a sense of pity that such conditions should continue to exist. John Middleton Murry in 1920 noted the extreme subtlety in Owen’s use of couplets employing assonance and dissonance. Most readers, he said, assumed the poem was in blank verse but wondered why the sound of the words produced in them a cumulative sadness and inexorable uneasiness and why such effects lingered. Owen’s use of slant-rhyme produces, in Murry’s words, a “subterranean ... forged unity, a welded, inexorable massiveness.”

'Strange Meeting' is probably Owen's best-known poem. For those who haven't encountered it yet and are now curious, it's here.

And you can find others at PoemHunter. (Just remember to turn off the sound, so as not to get the awful, mechanical voice they use on that site.)

There is also his author page at Amazon, which includes a volume of 'Selected Letters'. I remember hearing, years ago, on a TV program about war, a letter read out which had been written from a young World War I soldier to his mother. It was so beautifully (albeit simply) worded, I said to my husband, 'That was written by a poet!' And sure enough, it turned out to be one of Owen's letters home.