I have met them at close of day
Coming with vivid faces
From counter or desk among grey
Eighteenth-century houses.
I have passed with a nod of the head
Or polite meaningless words,
Or have lingered awhile and said
Polite meaningless words,
And thought before I had done
Of a mocking tale or a gibe
To please a companion
Around the fire at the club,
Being certain that they and I
But lived where motley is worn:
All changed, changed utterly:
A terrible beauty is born.

That woman's days were spent
In ignorant good-will,
Her nights in argument
Until her voice grew shrill.
What voice more sweet than hers
When, young and beautiful,
She rode to harriers?
This man had kept a school
And rode our wingèd horse;
This other his helper and friend
Was coming into his force;
He might have won fame in the end,
So sensitive his nature seemed,
So daring and sweet his thought.
This other man I had dreamed
A drunken, vainglorious lout.
He had done most bitter wrong
To some who are near my heart,
Yet I number him in the song;
He, too, has resigned his part
In the casual comedy;
He, too, has been changed in his turn,
Transformed utterly:
A terrible beauty is born.

Hearts with one purpose alone
Through summer and winter seem
Enchanted to a stone
To trouble the living stream.
The horse that comes from the road,
The rider, the birds that range
From cloud to tumbling cloud,
Minute by minute they change;
A shadow of cloud on the stream
Changes minute by minute;
A horse-hoof slides on the brim,
And a horse plashes within it;
The long-legged moor-hens dive,
And hens to moor-cocks call;
Minute by minute they live:
The stone's in the midst of all.

Too long a sacrifice
Can make a stone of the heart.
O when may it suffice?
That is Heaven's part, our part
To murmur name upon name,
As a mother names her child
When sleep at last has come
On limbs that had run wild.
What is it but nightfall?
No, no, not night but death;
Was it needless death after all?
For England may keep faith
For all that is done and said.
We know their dream; enough
To know they dreamed and are dead;
And what if excess of love
Bewildered them till they died?
I write it out in a verse—
MacDonagh and MacBride
And Connolly and Pearse
Now and in time to be,
Wherever green is worn,
Are changed, changed utterly:
A terrible beauty is born. 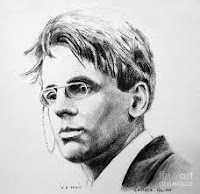 We've featured Yeats before. (Arguably the greatest poet of his time, and a lasting favourite of mine.) It's easy to find out about his life and writings online, so I won't deluge you with background links just now, except for this one here at Poets United, which our founder, Robert Lloyd, posted in November 2010. It's a colourful, interesting article (and somewhat opinionated – but so are most of mine, more than somewhat). For now, I want to focus less on the man than on this particular poem.

As you see, it's just over 100 years since this was written. It refers to the famous Easter Rising in Ireland against British rule, and reflects Yeats's mixed feelings about that event, being a man who, as the Wikipedia article about the poem tells us, abhorred violence, for all he admired the revolutionaries' heroism and commitment to the cause. Remember, too, that, as the poem indicates, he knew them in person. This must have been a particularly emotional event for him.

As the article also explains, he had reason not to admire, as people, all the individuals he names – but chooses to see them as transformed by their valiant attempt and subsequent martyrdom (defeat and execution). For all the poem honestly includes his reservations, it is a tribute to those people and a celebration of the spirit of the Rising.

There is a certain grim irony in the fact that the Rising took place at Easter, a time at which Christians honour another martyrdom, that of Jesus – and the subsequent resurrection (superseding many Pagan festivals to do with the death and resurrection of various deities). Yeats seems to suggest that the martyrdom of these Irish heroes, who wished to free their people, will also result in some kind of transformation / resurrection. And indeed, history tells us, their executions had the opposite effect from that the authorities intended, inflaming rather than dampening revolutionary passion in the Irish.

I see also a different kind of irony, in that the resurrected martyr who is now most widely celebrated at this time of year is known as the Prince of Peace.

On the other hand, the Bible quotes Jesus as saying: 'Do not think that I have come to bring peace to the earth. I have not come to bring peace, but a sword.' Then again, elsewhere this same Jesus seems to be saying that his sphere of action is not political. How are we to interpret these apparent contradictions?

Whether we are Christians or not, I think none of us can escape this dilemma – do we wage actual, physical war against those who would restrict our freedoms, or do we hope to counteract oppression by other means? Most of us don't get to make that kind of decision on a grand scale, even though we may be faced with many tiny instances of it in our daily lives. But we do, I think, need to consider our position on what our leaders do in our names.

I suppose I think this because, although I was not brought up Christian, I was brought up to consider both public ethics and personal integrity vitally important. In any case, as I say, we cannot escape contemplating these issues at this time in world history. Today's news just constitutes another step on our journey. What, I wonder, will be our ultimate direction?

Are we, after all, helpless in the face of large events? Perhaps. Those Irish heroes did not free their people politically – yet it seems they did much to help free their collective spirit.

Things appear not so clear-cut on the world stage now (at least as far as I can see). Maybe all we can do is focus on those small, daily decisions. I am sure I have quoted here, before, one of my favourite I Ching sayings: 'The best way to combat evil is to make energetic progress in the good.' That might not work on the world stage, where it is often hard to know what the heck IS the good – and where it may, sadly, come down to trying to decide which is the lesser of two evils – but it can still work in our personal lives.

Creating loving holiday times with family is surely a good! Today Christians (and even some Pagans like me) eat hot cross buns as a symbol of sacrifice, but by Sunday we'll be feasting on chocolate eggs as a symbol of new birth / rebirth and, in the Northern Hemisphere, the arrival of Spring. In troubled times, these small things (which are truly large) are potent symbols of Life and Love. We each need to find and celebrate them in our own lives, to make those lives count and to give ourselves and our loved ones the treasured experiences which can never be taken away no matter what else comes.

(In common with all the greatest teachers – and perhaps most clearly and directly of them all) Jesus said: 'Love one another.'