Your Ground
Its tongue
is the only thing moving
A striking distance
from your face
Sharp arc of snake
head flared with venom
A totemic weight
posted darkly in
suddenness of
grizzled air between you
Your body in mirrored freeze
still on your knees
swiveled from a lizard
you were attempting to capture
on a fistful of phone
Your jaws both clamped
over a rising silence
Wind is a litany of hiss
through grass and it arrives
at your eyeballs and the blink
brings release
snake melts toward the earth
its wilding light
shines and slides
A spilled surface of black
slick on the grit
The anthropologist
you were walking with
is bounding up behind you
and again the snake rears
yellow belly showing no fear
withers into twisting away
through underscrub
like an escape but slower
The luminous trance stays
for more than months
(you still can't remember
standing)
The psychologist says
your ego died (for
a few unsplit seconds)
Your friend, an elder
from Broome explains the snake
is your guardian
painting its likeness in repose
on bark you once fed a red
tailed cockatoo from
You hang it above
your writing desk
And for a while
it all makes sense
The brute matter
how dangerous you are
how safe
the circuitous journey
Then one morning you get it~
That paired wisdom
your bodies made 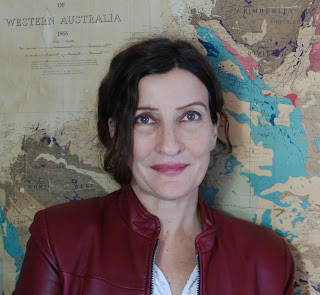 I first met Western Australian poet Amanda Joy ten or so years ago on MySpace, where we were both among the numerous poets there, many of whom managed to connect and interact, forming a sort of loose international community of poets. (Now a lot of us are on facebook instead, though that doesn’t work in quite the same way.)  It was a delightful forerunner of more organised online poetic communities such as Poets United.

She lives on the outskirts of Fremantle, Western Australia and is the author of two chapbooks, Not Enough To Fold (Verve Bath Press 2008) and Orchid Poems (Mulla Mulla Press 2001) 'Almost Pause/Pareidolia' was highly commended for the 2013 Blake Poetry Prize. Her poem ‘Tailings’ won the 2016 Peter Porter Poetry Prize.

Amanda and I have never met in person, as Western Australia is a long distance from the east coast where I live, but I’ve always loved and admired her work and was thrilled to discover her first full-length book in my local library recently. It’s published by UWAP (University of Western Australia Press) and is called Snake Like Charms – well named. The poems are extraordinary and varied, with a magical/mythical flavour about the whole book.

The landscapes she writes of in this book are very recognisably Australian: a thing which pleases this little Aussie, and no doubt many others. It’s good to have one’s home reflected back to one.

She says that her favourite bio-line comes from (Sydney poet) Robert Adamson, who described her as a “poet alive with the wonder of her vision”. The poem I’ve chosen to share with you here is certainly very alive and immediate. (And what a clever way to make it a shape poem, a snake-shape, by aligning right.)

Australian snakes are mostly venomous. Having had some close encounters myself – though not as close as the one described – I can certainly relate to the experience, and know that freezing is the first and best response. (Then, as in the poem, one or both parties move away from the mutual threat.) At the same time, I think snakes are beautiful beings, and have been told that Snake is one of my guardians too.

Though there are echoes of my own experiences, the wisdom arrived at in the conclusion is all Amanda’s own, albeit conveyed by the snake – and what great wisdom it is. Something to remember in troubled times … and at all times.

She was patron of the 2017 Perth Poetry Festival last month, and her Keynote Address can be read online. In it, she has thought-provoking things to say about poetic language – inspired by and expanding on the ideas of Fay Zwicky, whom I featured here recently in The Living Dead. She goes on to quote wonderful poems by Zwicky and others.

A woman of parts, she is also described in various places online as visual artist, sculptor, installation artist and songwriter.

You can find more of her poems at Poetry Foundation, Rochford Street Review, and at her (discontinued but still accessible) blog, Little Glass Pen.

Email ThisBlogThis!Share to TwitterShare to FacebookShare to Pinterest
Labels: Amanda Joy, I Wish I'd Written This