Poem at the New Year

Once, out on the water in the clear, early nineteenth-century twilight,
you asked time to suspend its flight. If wishes could beget more than sobs,
that would be my wish for you, my darling, my angel. But other
principles prevail in this glum haven, don't they? If that's what it is.

Then the wind fell of its own accord.
We went out and saw that it had actually happened.
The season stood motionless, alert. How still the drop was
on the burr I know not. I come all
packaged and serene, yet I keep losing things.

I wonder about Australia. Is it anything like Canada?
Do pigeons flutter? Is there a strangeness there, to complete
the one in me? Or must I relearn my filing system?
Can we trust others to indict us
who see us only in the evening rush hour,
and never stop to think? O, I was so bright about you,
my songbird, once. Now, cattails immolated
in the frozen swamp are about all I have time for.
The days are so polarized. Yet time itself is off-center.
At least that's how it feels to me.

I know it as well as all the streets in the map of my imagined
industrial city. But it has its own way of slipping past.
There was never any fullness that was going to be;
you stood in line for things, and the soiled light was
impenitent. Spiky was one adjective that came to mind,

yet for all its raised or lower levels I approach this canal.
Its time was right in winter. There was pipe smoke
in cafés, and outside the great ashen bird
streamed from lettered display windows, and waited
a little way off. Another chance. It never became a gesture. 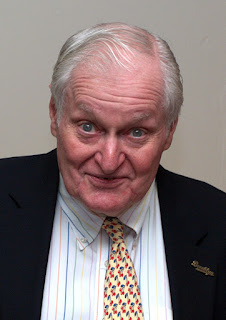 The great John Ashbery has died age 90 ('of natural causes' says his husband, quoted in the media). As a community of poets, probably many reading this will already know of his passing. I'm not American, which is perhaps why I have somehow missed most of his work until now. I didn't think I had, but I now realise that, due to a slight similarity of names, I was mixing him up with another US poet, John Berryman. (Shame on me! Both wonderful, but quite distinct.)

I have been enjoying catching up with more of Ashbery's poetry now – finding it interesting, rich, and often dense; both cerebral and moving. Many read as if he lets us inside his head in a stream of consciousness, but the poems are far too well crafted for that to be the case.

I like the one I've chosen here because (as well as being a beautiful poem) it seems to me to indicate his take on both life and death. Another that particularly struck me among the collection of his work at PoemHunter was the best cento I've ever seen, using very famous lines by other poets (albeit some few I didn't recognise). Even the title is from another poet – Edward Lear, keeping company with the likes of Shakespeare, Hopkins, Kipling.... Click here to enjoy it too, and to get access to a number of others.

He published more than twenty volumes of poetry and won nearly every major American award for poetry, including a Pulitzer Prize in 1976 for his collection Self-Portrait in a Convex Mirror

Stephen Burt, a poet and Harvard professor of English, has compared Ashbery to T. S. Eliot, calling Ashbery "the last figure whom half the English-language poets alive thought a great model, and the other half thought incomprehensible".

The poet himself is on record as saying he wanted his work to be accessible! But he also once said that his goal was 'to produce a poem that the critics cannot even talk about'. (Ah, but they keep on trying.) He is often experimental, both with form and language.

You can judge for yourself at the PoemHunter link or in a selection in the New York Times; also his works run into several pages on Amazon (though no ebooks, unfortunately).

Though he began writing poetry as a schoolboy, he originally wanted to be an artist. Over the course of his long life, he worked in and out of academia, in both literary and artistic fields. It was clearly a rich life in many ways. He lived for a time in Paris, and one of the ways he supported himself was by translating French murder mysteries. He also translated French poets. He became a friend and admirer of Andy Warhol and was associated with The Factory.

His former student, Tania Ketenjian, writing in The Guardian, says:

For Ashbery, poetry is not about definitions or pronouns or intentions or genres. It’s not about telling a story that has a proper conclusion. It’s about what it is to experience – experience anything. His work says you don’t need to decipher the words, just experience them. ... He taught me that poetry can be anything and with that comes great freedom....

How wondrously brilliant ... to create work that allows for the incessant contradictions of life and all that it beholds and to remind the reader, in the way in which you write, to not try to figure it all out, it’s life, moment by moment, experience by experience. It’s just life, it’s just poetry, everything and nothing.

Her whole article is well worth reading; also there are other detailed and comprehensive obituaries being posted online. Check Google.


Material shared in 'The Living Dead' is presented for study and review. Poems, photos and other writings and images remain the property of the copyright owners, where applicable (older poems may be out of copyright). The photo of John Ashbery above is licensed as Creative Commons 2.0 and is by David Shankbone.
Posted by Rosemary Nissen-Wade