It Was Long Ago

I'll tell you, shall I, something I remember?
Something that still means a great deal to me.
It was long ago.

A dusty road in summer I remember,
A mountain, and an old house, and a tree
That stood, you know,

Behind the house. An old woman I remember
In a red shawl with a grey cat on her knee
Humming under a tree.

She seemed the oldest thing I can remember.
But then perhaps I was not more than three.
It was long ago.

I dragged on the dusty road, and I remember
How the old woman looked over the fence at me
And seemed to know

How it felt to be three, and called out, I remember
'Do you like bilberries and cream for tea?'
I went under the tree.

And while she hummed, and the cat purred, I remember
How she filled a saucer with berries and cream for me
So long ago.

Such berries and such cream as I remember
I never had seen before, and never see
Today, you know.

And that is almost all I can remember,
The house, the mountain, the gray cat on her knee,
Her red shawl, and the tree,

And the taste of the berries, the feel of the sun I remember,
And the smell of everything that used to be
So long ago,

Till the heat on the road outside again I remember
And how the long dusty road seemed to have for me
No end, you know.

That is the farthest thing I can remember.
It won't mean much to you. It does to me.
Then I grew up, you see. 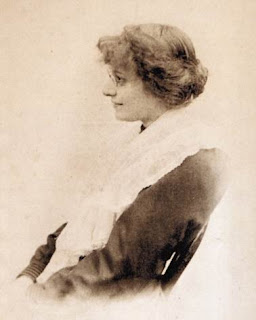 I used to love Eleanor Farjeon's stories when I was growing up. Sometimes they contained poems; and this poem could well have been written for children. The 'you know' and 'you see' (which I admit I find slightly irritating) could suggest as much.

However the nostalgia for a special moment in childhood belongs to the adult, even if in the poem she means to address children. She makes me feel it too, almost as if I had had that very experience. Although I didn't, and you didn't, we can all, I'm sure, remember berries and cream, sunny days, dusty roads, cats and kindly old women.

Wikipedia tells us that she 'was an English author of children's stories and plays, poetry, biography, history and satire. Several of her works had illustrations by Edward Ardizzone. Some of her correspondence has also been published. She won many literary awards and the Eleanor Farjeon Award for children's literature is presented annually in her memory by the Children's Book Circle, a society of publishers.'

She came from an artistic and literary family. Her father was a novelist, her mother the daughter of an actor. Poetry Foundation describes their home as 'a literary and artistic hub'. One younger brother grew up to be a composer, another a novelist, and the oldest (to whom she was very close) a Shakespearean scholar and drama critic. A timid child with poor eyesight ('Just like me!' I can't help thinking) Eleanor grew up to have a wide range of literary friends, including D. H. Lawrence, Walter de la Mare, Robert Frost and Edward Thomas.

Her best-known poem was written as a hymn, to put words to an old Gaelic tune. You'll know it — it's the beautiful Morning Has Broken (which she titled Morning Song) usually credited to Cat Stevens (Yusuf Islam) whose singing popularised it.

Her best-known novel, the unforgettable Martin Pippin in the Apple Orchard, was written for adults but became famous as a children's story. It works on both levels, delighted me when I was a child and still does.

You can read more of her poems at PoemHunter. Some of her books (more fiction than poetry) are listed at her Amazon page; a few of them are even in Kindle. I just grabbed the Martin Pippin book and its sequel, Martin Pippin in the Daisy Field; high time for a re-read.


Material shared in 'The Living Dead' is presented for study and review. Poems, photos and other writings and images remain the property of the copyright owners, where applicable (older poems may be out of copyright). This picture of Eleanor Farjeon is in the Public Domain.
Posted by Rosemary Nissen-Wade