Is it the hour? We leave this resting-place
Made fair by one another for a while.
Now, for a god-speed, one last mad embrace;
The long road then, unlit by your faint smile.
Ah! the long road! and you so far away!
Oh, I’ll remember! but … each crawling day
Will pale a little your scarlet lips, each mile
Dull the dear pain of your remembered face.

…Do you think there’s a far border town, somewhere,
The desert’s edge, last of the lands we know,
Some gaunt eventual limit of our light,
In which I’ll find you waiting; and we’ll go
Together, hand in hand again, out there,
Into the waste we know not, into the night? 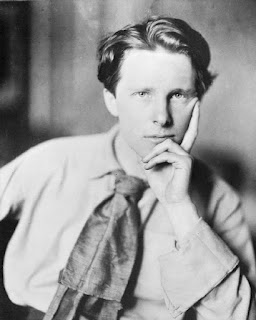 English poet Rupert Brooke's haunting Fragment, Source, which Susan used in the latest Midweek Motif, reminded me about this poet, whose work I was brought up on.

Some of his poetry, in its attempts at poetic language, now seems old-fashioned and even pretentious, with 'thees', 'thous' and inversions. But when he writes from the heart he achieves some minor masterpieces.

This is especially true when he writes of simple, everyday things, as in two of his best-known poems, The Great Lover, in which he celebrates domestic objects as well as the natural world, and the homesick The Old Vicarage, Grantchester. They also reveal his mastery of rhyme. I think this must be the most ingenious rhyme in English poetry:

Across the moon at Grantchester!

It made a great impression on me when I was kid, and I'm still amazed by it.

He also wrote some renowned war poems, and his most famous poem was one of these: The Soldier, which was read from the pulpit of St Paul's Cathedral on Easter Sunday 1915 and has been featured in numerous anthologies ever since. I think it sentimentalises war, but very persuasively, and is also redolent of homesickness.

He died young, aged 27. Although he was known as one of the 'war poets' of the First World War, was commissioned into the Navy and was on the way to Gallipoli at the time of his death, he didn't die in battle but of a mosquito bite that turned septic. He was buried 'in a foreign field' as his most famous poem imagines, but not a field of war. His grave is on the island of Skyros in the Aegean Sea.

It's sad for anyone to die so young, and although he doesn't have the stature of, say, a Wilfred Owen, he was a talented poet whose best work is lasting, and  would surely have gone on to greater things.

He was educated at Rugby, where he won the school poetry prize when he was 18, and at Kings College, Cambridge where, we are told, he was noted for his good looks, intellect and charm as well as his poetic talent.

As an adult he travelled extensively (before war broke out) and wrote travel articles as well as poetry.

You can read more about him at Wikipedia, Poetry Foundation, or The Academy of American Poets. PoemHunter has his poems, and you can find books by and about him at Amazon.

Material shared in 'The Living Dead' is presented for study and review. Poems, photos and other writings and images remain the property of the copyright owners, where applicable (older poems may be out of copyright). The photo of Rupert Brooke, above, is in the Public Domain.
Posted by Rosemary Nissen-Wade