I Wish I'd Written This: Lee Maracle, Speaking Truth to Power


This powerful poem is read by Lee Maracle, one of the foremost poets and writers in Canada. Ms. Maracle  is from Vancouver, B.C., a member of the Sto:lo Nation, of Salish and Cree ancestry. She is a granddaughter of the renowned Chief Dan George, of North Vancouver. She was one of the first aboriginal writers to be published  in Canada in the early 1970's. Ms. Maracle now lives and teaches in Toronto.

I could not have written this, as I am not a member of First Nations. But I empathize with how this beautiful nation of people - the first who lived on this land for thousands of years - was displaced, marginalized and oppressed by those who arrived here much later. And I so admire Ms. Maracle's strong voice, speaking truth to power. 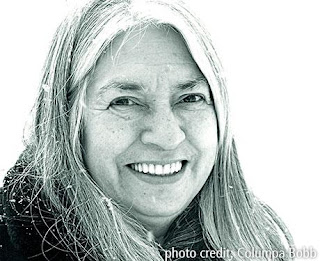 Her above poem, "Aboriginal Apology", is a triumphant response to the Canadian government's lame attempts to address reconciliation these last few years. So far apologies have been inadequate. Perhaps because reparation would go further than words in addressing the injustices done to an entire people since colonial times.

In articles I have read about her, one of her quotes stood out for me:


"Where do you begin telling someone
their world is not the only one?"

Ms. Maracle has written many books: novels, works of nonfiction,  and poetry. She has edited several anthologies.  She is also an educator, social activist, performance artist, storyteller, playwright, songwriter and Artistic Director of the largest aborginal theatre in Canada, in Toronto.

Ms. Maracle has given hundreds of speeches on political, historical, and feminist sociological topics  related to native people. She has conducted dozens of workshops on personal and cultural reclamation, serving as a consultant on First Nations’ self-government. She has an extensive history in community development.

Lee Maracle is one of the most prolific aboriginal authors in Canada. Her life and her voice are inspiring to all generations. I thought I would introduce her to you, so those outside of Canada can hear her voice, speaking truth to power with such strength.

The long list of her works can be found here.

Here is another example of her work.

Do you speak your language?
I stare—I just said: how are you?
I thought English was my language
apparently it isn’t
I thought Halkomelem was gibberish
the devil’s language
that’s what the nuns said
apparently not
Some white guy sets me straight:
Aboriginal people are losing languages
Funny, I thought I had it just a moment ago
maybe it’s in Gramma’s old shoebox
maybe it’s sandwiched between papers
in plastic bags hidden under mom’s bed
Hey, has anyone seen my language?
Will my words dangle from empty raped mountains?
laid waste on dead seas
Or will they sing sweet from the skirt of winds
remembered songs of hope not realized?

I weave this imagined dream world onto old
Suquamish blankets,
history-hole-punched and worn—
to re-craft today,
to re-member future in this new language.
And I sing I am home again.

Lee Maracle, from Talking To the Diaspora, 2015

I do hope you enjoyed meeting this amazing and powerful woman.