The daylight times feelso short now, and sleepholds never more thana handful of hours.Life runs away like thatfor the old man whose spiritsees no age in him,but whose body stabs himto wakefulness alongthe dark trail to morning.It drops him without warninginto a drowsy torpor whiledaylight, who knew himso well, still callsfrom the windowto come out and play.He ponders where theremaining shards of each day go,as if they’re hiding in the pocketof some thief of latter days.He realizes no one stolethese missing heartbeats,these warm knowing gazes,these potential walks and talks,these stories left untold.He’s the one who lost themto another sunset and he’sthe only one who can steal themback from each new dawn,if he’d let his ageless selfrise and seize this day. 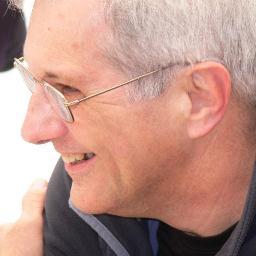 Joseph Hesch is a writer and poet from Albany, New York. His work appears or is forthcoming in over a dozen venues, including Cossack Review, Boston Literary Magazine, Downtown Los Angeles Life Magazine, Frontier Tales and Pine Hills Review. His poetry collections, "Penumbra: The Space Between" and "One Hundred Beats a Minute" are available on amazon.com.
He tells me he’s currently working on his first collection of short stories and flash fiction set in the American Frontier, as well as another collection of stories tentatively titled "But Don't Touch."

I first encountered his work via the poetic community dVerse, which I think most of you know, on his blog A Thing for Words – a distinctive voice which held its own among many excellent poets.

His personal story about being a writer is on his blog too, and he has given me permission to share it here, in full or excerpted. I think his way of telling it is so engaging that I wouldn't dream of leaving anything out:

I'm a writer. That's what I do. It's what I've always done. And I've been doing it for a living since I was 20 years old. That's a long time ago.

All that time, I've been writing for The Man, the boss, putting others' words on paper or my words in others' mouths. For almost 30 years, I wrote the equivalent of grey government cheese for zero benefit for my heart and soul.

Ten years ago, an out-of-the-blue heart condition informed me that each day is a blessing not to be wasted because you may not get a tomorrow. Part of that waste was denying the Writer within me the room to breathe fresh air instead of the climate-controlled breeze wafting over my office cubicle. Near-death experiences can do that to you.

I started to write for me. Mostly sassy essays that I shared with friends around the USA. Then I knocked off a bit of memoir at my kitchen table one afternoon about the Christmases of my childhood. I submitted it to a publisher who was putting together a Christmas anthology and it was accepted for publication.

So I continued to write, for the discoveries I was making in myself and the world I'd ignored for the previous decades. And then everything stopped.

I can't call it writer's block. I had lost that feeling of creating something tangible from sense and memory. It hurts when that happens.

A dear friend noted that my prose always sounded quite poetic to her. "Why don't you write a poem?" she said. In desperation, I did as she asked. I started out with the 5-7-5 structured hug of haiku.

It was accepted for publication. As was the next poem. The poetry recharged my fiction machine and I was back in business as a writer. But this time I was really writing for me. Or I guess I was just really writing.

And here we all are.

So now I write now almost every day. Some days it's poetry and others it's stories. Very little of it is revised. I blame my newspaper roots. Write it, hand it over and move on. It’s not mine anymore. It’s yours.

He also posts poems on facebook, which is where I first saw the one I've chosen. I like the simultaneously serious and humorous reflection on ageing, and particularly the mention of the 'ageless self' which, I like to think, lives within us all. He describes the piece as a 'morning scribble' which he wrote 'literally in 20 minutes after getting out of bed one morning'.

20 minutes! Joe is a very nice fellow, but there are moments when I could almost get to dislike him (lol, j/k). But then he disarms me by describing himself as 'the semi-geriatric poet and teller of tales that I hope move readers in some positive way'. What a great motive! And yes, very positive. Always a pleasure to read.

Email ThisBlogThis!Share to TwitterShare to FacebookShare to Pinterest
Labels: I Wish I'd Written This, Joseph Hesch